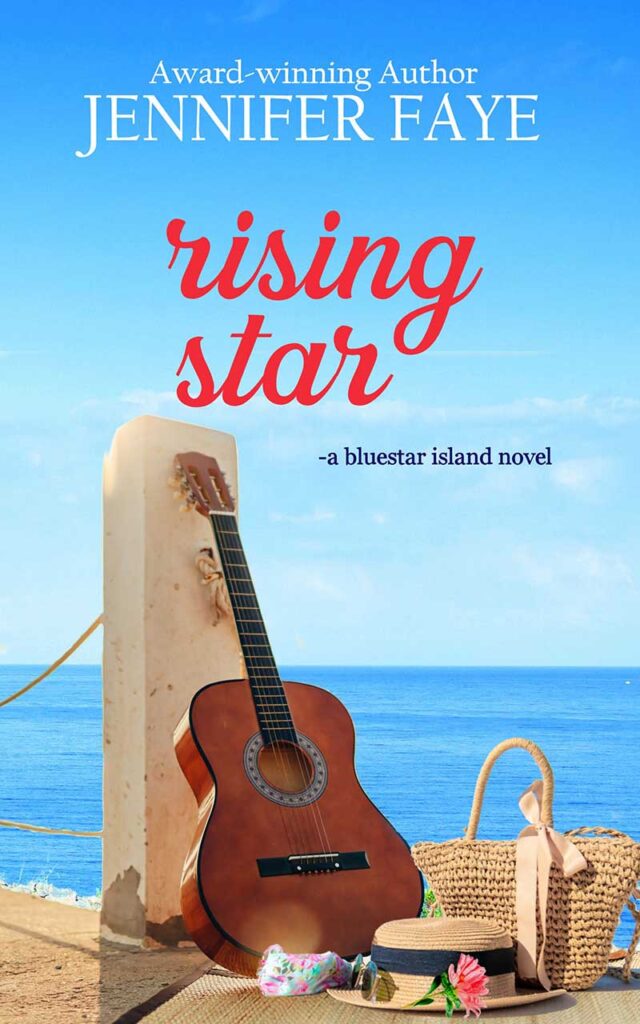 When Bluestar’s hometown celebrity unexpectedly returns to the island, there’s a heartbreaking scandal following her…

Country singer Emma “Em” Bell’s finally making headlines—just not the right ones. With a broken heart and doubts about her judgement, she rethinking her future. Before she has time to sort out her feelings, her assistance is desperately needed. Bluestar’s Concert on the Beach summer spectacular is in trouble and her soon-to-be sister-in-law’s job is on the line.

Financial investor turned carpenter, Noah Sullivan, has retired from his high stress job due to health issues. He’s moved to Bluestar Island for a quiet, healthy lifestyle but when Emma blows into town, his days are anything but serene.

With all the small town counting on them, Noah and Emma must work past their conflicts to keep a promise to someone special to both of them. Will the summer’s sun soothe their tension and the sea breeze lull them into a peaceful surrender of their hearts? 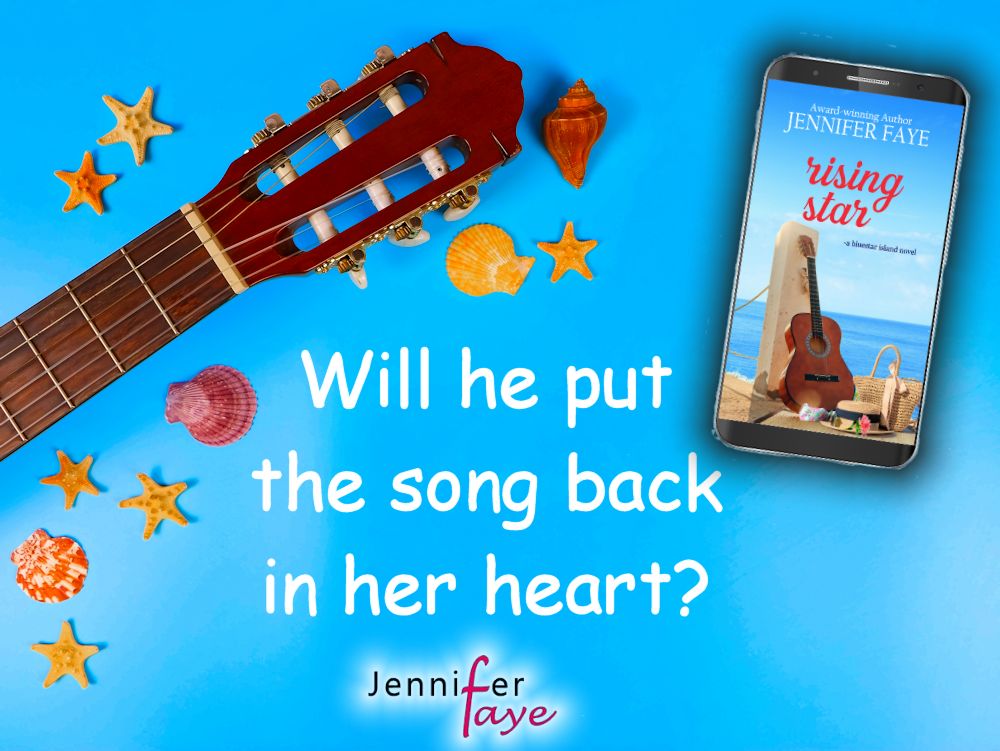 “Jennifer Faye’s Blue Star Island is one place I love to return to in books, and with Rising Star we get island native Emma Bell’s story.”
Remembrancy

“I absolutely love Bluestar Island. The small town feel and the connection among its residents make it a place I would love to live.”
Christy’s Cozy Corners

Emma Bell groaned as she rolled over, pulling the pillow over her head. She didn’t want to wake up. Not yet. She took a deep breath and then let herself drift back to dreamland.

She’d been having the most amazing dream. The images resumed playing in her mind. She could feel the warmth of the sunshine on her face. The light taste of the salty sea breeze on her tongue was so real. She was strolling along the beach. She felt the sun-warmed sand between her toes and then the rush of sea water.

She felt so at peace. She smiled and turned her head. There was someone standing just ahead of her, but she couldn’t quite make them out. It took a moment for her gaze to focus. The man had his back to her. He was tall with short light-brown hair.

She was drawn to him. As she approached him, her heart beat faster. She loved him. But who was he? His brown hair and height were wrong for JT.

He started to turn to her.

Emma sat upright with a gasp. The man’s image vanished before she was able to see his face. Disappointment assailed her. She knew it was just a figment of her imagination, but something about this particular dream had felt so real. But how could that be?

She’d already found her forever guy. Her thumb toyed with the diamond ring on her finger. It was still there. With a relieved sigh, she sank back against the pillows. How could she be dreaming about some mystery man when she was engaged to the sweetest, kindest man?

She glanced around at the beige walls and beige drapes. The hotel room didn’t look familiar. She tried to remember the name of the city.

Emma cleared her throat. “Yeah. Be right there.”

In that moment she regained her bearings. She was out on the road with her amazingly talented band. Her very first concert tour experience had been a whirlwind of events. And she had faced a steep learning curve. There was nothing to ground her—nothing to keep her from drifting off course.

She yawned as she stumbled out of bed and moved to the window. She pulled back the heavy curtains. The sun was just starting to rise. And as her gaze moved beyond the parking lot to the buildings across the way, she still had absolutely no idea what city she was in or even the state.

She couldn’t keep going like this. No one had told her that chasing her dream of being a singer would be this way. She was the opening act for the opening act.

Because not only did she sing country songs, but she also wrote and sold them too. At the moment, she didn’t have a creative thought in her head. That had never happened before. She had notebooks filled with poems and lyrics. Some good, a lot not so good. But now when she stared at a blank page, the words didn’t come to her. What was a singer without words?

If she lost her creativity—if she couldn’t write the songs that evoked emotions—if she lost what made her her, then what was she doing all of this for?

“Get a move on!” It was one of the band members. “The airport shuttle is pulling out in ten.”

“Be right there.” She turned, spotting her still-packed suitcase near the door.

During this tour, she’d perfected the five-minute shower, followed by pulling her damp hair into a messy bun.

That many messages that close together piqued her curiosity. She retrieved her phone from the end table. It was there she saw a brochure that read Seattle. That was where they were.

With her phone in hand, she sank down on the edge of the bed. She swiped her finger across the screen. Her phone sprang to life and blew up with message after message. There were hundreds of them. What in the world?

Sympathies and virtual hugs abounded. Oh, no. Someone must have died to stir up this much of an outpouring. Her chest tightened. But who?

She clicked on the first link. It took her to a gossip site. Right there on the home page was a photo of her boyfriend, um, her fiancé, JT. He was kissing someone. And it wasn’t some little kiss on the cheek.

The breath hitched in her throat. This couldn’t be real. She blinked, but the image was still there—JT with his arms around someone else.

This couldn’t be right. It had to be an old photo. Yes, that was it. This must be a relationship he’d had before he met her.

She desperately wanted that to be the case, so much so that she almost closed the screen. But a niggling bit of curiosity had her enlarge the photo. And that was when she saw it—his new tattoo.

They were supposed to get matching tattoos, but at the last moment, she’d chickened out. Her fear of needles won out over her disappointing JT. And yet he’d still opted for a new tattoo to add to his collection.

He’d gotten a star. He said it reminded him of her. She was like a star that guided him home. At the time, she’d thought it was the most romantic thing.

Now she wondered if he’d also used that line on the new woman in his arms. Her heart ached. Why had he done this right after proposing to her? Had it all been a lie?