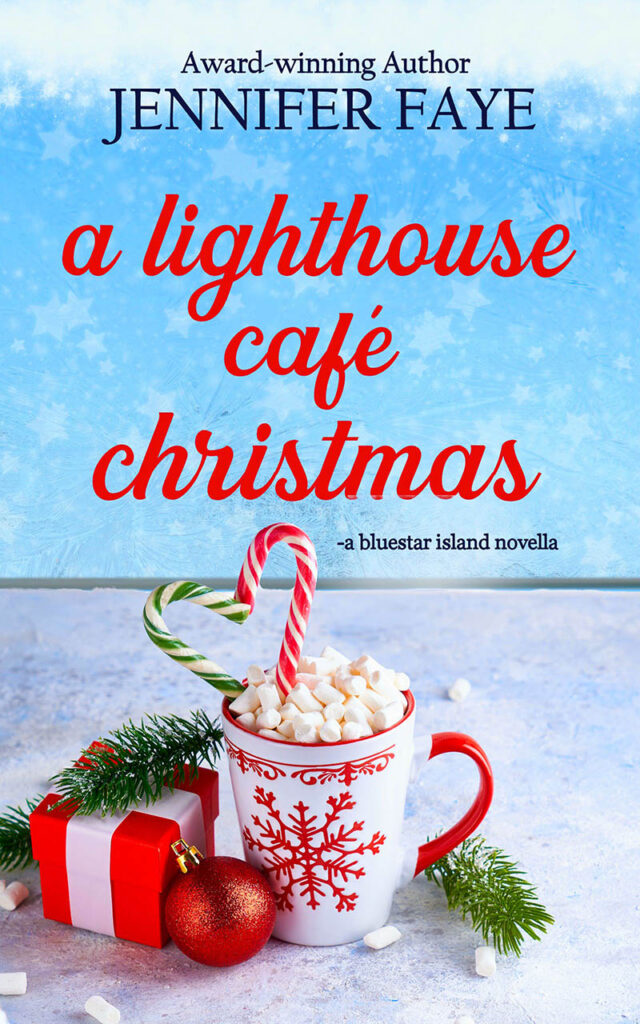 When Santa’s sleigh crashes into The Lighthouse Café, Bluestar’s beloved waitress is reunited with the one man who broke her heart.

In this holiday novella, Darla Evans isn’t living the life she’d imagined, but she’s working to reinvent herself. However, when her ex-fiancé returns to the island, she knows there’s no avoiding the past.

Tech entrepreneur, William “Will” Campbell, has returned to his childhood home to be the best man in his father’s holiday wedding. But first he has a very special task—to restore an antique sleigh in time for the wedding. However with Christmas Eve quickly approaching, he needs help.

As snowflakes cover the small town of Bluestar, Will and Darla work together to create a special surprise for the bride. Yet with the past looming between them, will the magic of the season be enough to open their hearts and allow them to find love again? 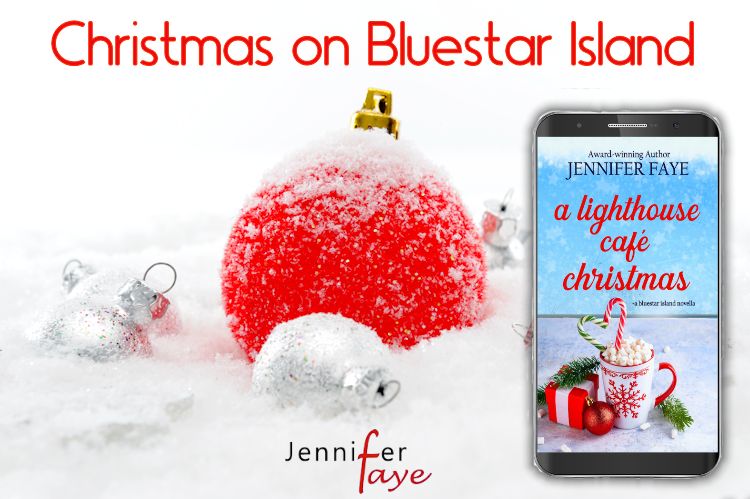 “Santa’s sleigh crashes through The Lighthouse Café? Yep thats what happens in this sweet and clean romance by Jennifer Faye…You don’t want to miss this Christmas read.”
~ Splashes of Joy

“An enchanting Christmas novella that is comforting, warm-hearted and so enjoyable, I couldn’t resist devouring A Lighthouse Café Christmas in a single sitting. Jennifer Faye sprinkles plenty of humor, magic and heart in a captivating tale sure to delight and enthrall romantics everywhere.”
~ Bookish Jottings

“Jingle Bells” played on the speakers.

Darla Evans mouthed the words. Her steps were light and quick. The holidays were upon them. It was her absolute favorite time of the year. And this year was going better than others. Her college roommate, Aster, had moved to the island. And Darla was hoping for a promotion to assistant manager of The Lighthouse Café.

She’d been waiting tables at Bluestar’s most popular restaurant off and on since she was a teenager. She never thought she’d be working there thirteen years later. Life never seemed to work out the way she’d planned, but it didn’t stop her from dreaming.

A smile pulled at her lips. It could be Christmas every day of the year, and she’d be happy with it. What could be better than colorful decorations, twinkle lights, and a friendly smile on most everyone’s face?

Except for Agnes Dewey. Her smile was more like a frown. But she didn’t count, because she was Bluestar’s honorary Scrooge. Darla felt sorry for the woman. She’d always wondered what had put Agnes in a permanently grouchy mood. Some people thought she’d been jilted by a man when she was young. Others thought Agnes had been born with a frown on her face.

Either way, Darla wasn’t going to let the woman’s sour disposition ruin her good mood. It was a little more than two weeks until Christmas, and she had already finished her Christmas shopping. She’d gotten a new purse for her mother—one that her mother had been oohing and aahing over at Sew Delightful Boutique. For her father, she’d gotten a new fishing rod that he refused to buy himself because his old one would “do for a few more years.”

And for her cousin, the mayor, she’d gotten a blue tie with little lighthouses on it. She didn’t know if he’d wear it, but she couldn’t resist it when she’d seen it at a men’s store on the mainland. For her best friend, Aster, she’d gotten a cookbook because now that she and Sam were engaged, Aster was trying hard to improve her domestic skills in between her work at city hall.

And that was pretty much Darla’s shopping list. Of course, she’d gotten little gifts for her other friends. This year she’d gotten each of them a lighthouse ornament and chocolate.

A ding of the bell meant her order was up…Agnes’s order of a hot turkey sandwich and mashed potatoes smothered in gravy. Darla moved swiftly to the counter. If Agnes thought her food had waited so much as a minute, she would send it back to the kitchen, claiming it was cold. Darla resisted rolling her eyes. Sometimes she thought Agnes complained just so she’d have something to talk about.

Darla grabbed the warm plate and moved to Agnes’s table. She briefly noticed the café didn’t have a lot of holiday vibe, with its beachy blue walls decorated with ocean murals. Still, there was a Christmas tree on the long counter at the back of the restaurant. The spacious dining room was filled with small wooden tables made of whitewash wood. Each had a lighthouse ornament on the table that lit up. It wasn’t a lot of holiday spirit, but she supposed something was more than nothing.

On her way to Agnes’s table, two couples waved goodnight and headed for the door. It was a quiet Thursday evening, and she was the only server working. In fact, she’d been left in charge this evening—something that was happening with more frequency in the last couple of months.

Darla placed the oval plate in front of her. “Can I get you anything else?”

“Yes. I need another fork. There’s a mark on this one.” She held out the offending utensil.

“Certainly.” As Darla walked away with the fork, she didn’t notice anything wrong with it other than a little water mark. But she knew Agnes wasn’t happy unless she found something wrong with her meal, and so she grabbed another fork from behind the counter, gave it a visual inspection, and then took it to Agnes. “Here you go. Is there anything else?”

“I was reading your horoscope today, and it predicted this would be a day of great change.”

Darla wasn’t sure what surprised her more, that Agnes seemed to remember everyone’s birthday or that she recalled everyone’s horoscope. “And how’s your day been?”

Agnes shrugged. “Pretty much the same as always. Too many tourists for the holidays. Too much noise. Too much holiday cheer.”

“But surely you have to enjoy something about the holidays, right?” She really hoped the woman found it in her heart to enjoy Christmas.

“Bah…too much is made of it.” She inspected her new fork before plunging it into the mashed potatoes.

She shoved aside the prediction. She had other matters on her mind. Like the upcoming Christmas Eve wedding of Helen Bell and Chief Walter Campbell. She was so happy for them, but she also knew the wedding would mean that Will would be coming to the island. And she wasn’t ready to see him. In fact, if she never saw him again, it’d be all right with her.

In the seven years since they’d called off their wedding, she’d been able to avoid him. Since he rarely visited the island, she was able to arrange to be on the mainland when he was there. She either spent some time in Boston or she went on vacation. But this time was different. This time she wasn’t able to take the time off from the café. Besides, she was expected to attend the wedding.

Maybe enough time had passed, and she’d feel absolutely nothing when she looked at him. Maybe it was time to leave it all in the past. Could it really be that simple?

As she stood behind the counter, Darla stared out the window. Evening had settled in early. In the glow of the lampposts, she saw a light snow had started. Was that the change Agnes had predicted?