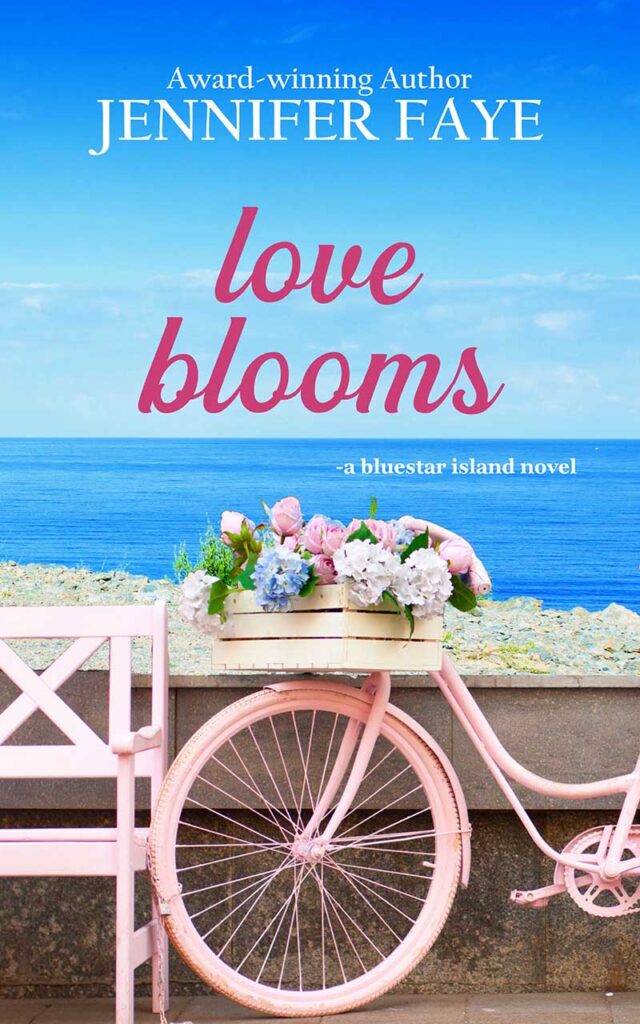 The elegant baker, Hannah Bell, has always lived on Bluestar Island with her family. While still grieving for her father, who died in a fire, she focuses all of her energy on making her dream come true—opening her very own bakery. But when a broken water pipe washes away her carefully laid plans, she’s on the verge of losing everything. 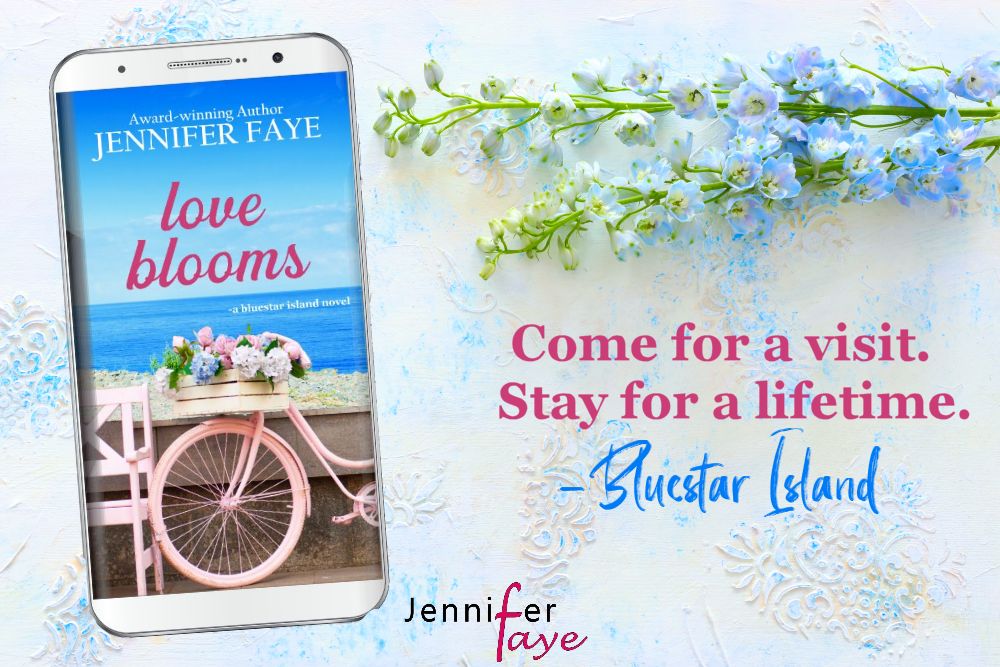 “I am a huge fan of Jennifer Faye’s and she has once again penned a stellar contemporary romance that made me laugh and cry. Enchanting, emotional and so enjoyable readers will gobble it up like a delicious blueberry muffin, Love Blooms is a hopeful and heartfelt page-turner, with a fantastic heroine and a gorgeous hero, which has got winner written all over it.”
~ Bookish Jottings

“This is an uplifting story of community closeness, and interactions. It is a story of unselfishness, caring, grieving, moving on, unity and facing ones own demons.”
~ Rockin’ Book Reviews

Ethan Walker’s heart stuttered at the mention of the word hospital. “Mom?” Static. “Mom, I can’t hear you. Who’s in the hospital? Are you all right?”

As Ethan stood in the Engine 256 Firehouse where he worked, the world came to an abrupt halt. He clutched the phone tighter to his ear. Maybe he’d misunderstood her. Maybe she hadn’t said hospital.

“Mom.” He raised his voice. “I’m going to call you back.” He disconnected the call.

His parents were on the trip of a lifetime, spending a month touring Europe. This was their first week away and if he recalled correctly, they had just arrived in Paris. He was thankful his mother had set her phone up with an international calling plan. He liked hearing about their travels and experiences. But he’d never appreciated the ease of calling her more so than now.

He rushed to pull up her number. The phone rang once.

“Ethan?” His mother’s voice was clear, as though she was standing next to him.

“Mom, what’s going on?” He willed her to say everything was all right—that he’d misheard her.

“It’s Aunt Birdie. There’s been an accident. She’s at the hospital.”

Aunt Birdie was technically his great-aunt, which meant she was getting on in age and a fall could be serious. Aunt Birdie was his mother’s aunt and the only living relative on her side of the family. Aunt Birdie had grown up in Brooklyn, just like him, but when she married, she moved to Bluestar Island just off the Massachusetts coastline. It was a lesser-known island than Nantucket or Martha’s Vineyard, but it still had its own charms and distinct folklore.

His great-aunt was more than just a fun aunt; she was more like a loving grandmother to him. He remembered as a child visiting Bluestar Island for Christmas and especially for the Fourth of July celebration. He’d even spent part of his summer vacations with Aunt Birdie. They were some of his favorite memories.

With great trepidation, he asked, “How bad is it?”

“I…I don’t know. Must have just happened. I missed the call. Someone left a generic voicemail saying she fell, but they gave no other details about the extent of her injuries. I tried calling but with all of the rules and regulations, I couldn’t get any details. I’m trying to get a flight home but everything is booked.”

The thought of his parents abandoning their once-in-a-lifetime trip, when they didn’t know the seriousness of the situation, didn’t sit well with him. “Mom, hold off on the reservations—”

“But I have to be there for her. Aunt Birdie doesn’t have anyone else.” Her voice was filled with worry.

“But you have to get back to work.” She momentarily paused, as though shifting her thoughts. “You’re all right now, aren’t you?”

She was referring to his on-the-job accident that had sidelined him for weeks, but he was feeling much better now. In fact, he’d just gotten his medical release. He knew his mother worried about him. She always had. He supposed she always would. It’s what mothers do. And it was all he could do to get her to quit fretting about him and leave on this long-planned trip.

“I’m all better, but I have a lot of vacation time saved up—”

“Ethan,” called out his captain. “Just the man I want to see.”

Ethan turned to the large man standing in his office doorway. “Mom, hold on a second.” He held the phone to his chest. “Cap, I’ll be right with you.”

The man, who was always way too serious, glanced at the phone in Ethan’s hand before their gazes met once more. “Make it fast.”

After Captain Morales turned and walked back into his office, Ethan said, “Listen, Mom, I’ve got this. Don’t worry.” He did have a lot of vacation time. He was always working; just ask his ex-girlfriend, Mary. “I’ll drive up to Bluestar and find out what’s going on.”

“Listen, it’s going to be a lot faster for me to get there than you. I’ll call you when I find out anything. How many hours are there between us?”

“It doesn’t matter about the time difference. I don’t care what time it is. When you find out something—anything—call me.”

He nodded. “I’ll do that. I have to go.” Before they disconnected, he said, “Mom, try not to worry. Everything is going to be all right.”

“I hope you’re right. Call me when you get there. And be careful.” She always worried about his safety, no matter his age. “I love you.”

Ethan slipped his phone into his pocket and then turned to head into the captain’s office. Ethan paused at the doorway. Captain Morales, or Cap as the crew liked to call him, was ten or so years older than Ethan. The man was good at his job—at following the protocols. Perhaps if Ethan was more of a rule follower, he wouldn’t have been sidelined with his injuries.

Cap sat behind his large desk with its neatly stacked papers and files. The captain’s dark hair was lightly peppered with gray. Ethan had been told more than once that he was responsible for a few of those gray hairs.

Cap glanced up and signaled for Ethan to join him. Ethan stepped inside, closing the door behind him. The room suddenly felt as though it had shrunk considerably.

He’d been in this room many times, some of the visits good and others were, um, stern warnings about him taking too many chances out in the field. Those chances had finally caught up with him this last time. But he didn’t want to think about that now. He shoved the troubling thoughts to the back of his mind.

“Have a seat.” Once Ethan was seated, the captain continued. “Thank you for keeping me updated on your recovery progress. You’ve done well in such a short amount of time.” The captain’s serious gaze met his. “But don’t forget, it could have been a lot worse.”

Cap’s chair groaned as he leaned back in it. He steepled his fingers together. “I just received your work release forms.”

Ethan rubbed his palms on his jeans. “About that, sir, I was wondering if I could take some vacation time?”

The captain’s brows scrunched together as his brown eyes probed him. “Are you still having issues?”

“No, sir. It’s not that. I’m ready to get back to work.” He wished he felt as confident as he sounded.

He glanced down at his hands, with their red burn scars that trailed up under his jacket sleeves. They served as a vivid reminder of his near miss with a blaze that quickly flamed out of control. He tugged down his jacket sleeves.

Ethan shifted in the cushioned chair, not able to find a comfortable position. He was beginning to think his discomfort came from being in this office, and it had absolutely nothing to do with the chair itself.

A text message. Ethan’s gut told him it was a message from his mother.

Cap didn’t say anything, so Ethan took that as a sign to go ahead. He retrieved the phone from his pocket.

His pulse picked up its pace. Surgery at Aunt Birdie’s age would be risky. His jaw tightened. He texted his mother back.

I’ll be there soon.

He slipped the phone back into his pocket. He lifted his gaze to meet the captain’s inquiring look. “Sorry. My great-aunt was just rushed to the hospital. I’m her only family in the States, as my parents are in Europe. I need to go to Bluestar Island.”