Skip to Main Content
On Tour with Prism Book Tours
Note from the Author
Thanks so much for joining me for the launch of The Bartolini Legacy trilogy. This family saga filled with secrets, surprises and lots of romance begins with THE PRINCE AND THE WEDDING PLANNER.
Sometimes it’s a choice to change your life—such as starting your own wedding business. Other times, change can be thrust upon you with a phone call or in this case, the turn of a page.
Wedding planner Bianca Bartolini’s life has been thrown into a series of cascading changes when she returns to Tuscany for her parents’ funeral. Yet when she uncovers her mother’s journal, she comes across a bombshell of a secret. The words on those weathered pages put everything she and her brother and sister know about themselves, their parents and their relationships into question.
Crown Prince Leopold’s younger sister is getting married but what should be a joyous occasion is anything but harmonious. Leo needs some peace and quiet if he is ever to choose a wife—a mandated requirement before he can be crowned king. And then he latches onto the idea of hiring wedding planner Bianca—someone who will report to him and bring peace back to the palace…
I hope you’ll join Bianca and Prince Leo in this royal romance as they wrestle with the past and come to terms with the present in order to have a happily ever after future.
Happy reading,
— Jennifer 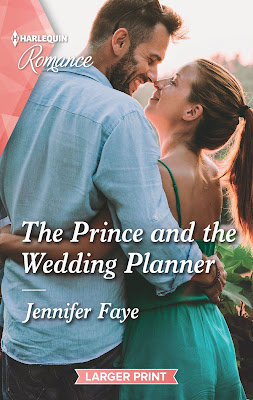 The Prince and the Wedding Planner
(The Bartolini Legacy #1)

By Jennifer Faye
Contemporary Romance
Paperback & ebook, 256 Pages
March 1st 2020 by Harlequin Romance
When different worlds collide…
…sparks fly!
With her family name on the line, wedding planner Bianca Bartolini needs this royal wedding to go perfectly—she can’t afford distractions. Too bad the bride’s dashing brother has other plans! Duty-bound Crown Prince Leo has mere weeks to announce his own engagement, but none of the candidates measure up to Bianca. They’re the most unlikely match, but might that just make them perfect for one another?
(Affiliate links included.)
Goodreads | Kindle | Nook | Book Depository | Apple | Kobo | PRINT 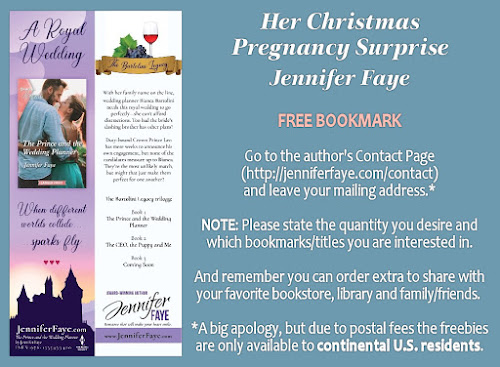 This was definitely one of his better ideas.

Leo stood at the edge of the hot air balloon’s basket as Bianca filmed the lush landscape with her phone. The truth was that he hadn’t noticed the passing scenery as he was entranced with the beautiful woman next to him.

He shoved aside his problems. Right now, all that mattered was making Bianca happy.

His gaze moved to her. The big smile on her face was brighter than the morning sun. And there was a gravitational pull to her that drew him close.

“Are you enjoying yourself?” he asked.

She lowered her phone. “I can’t believe you did this.” Her eyes glittered with happiness. “It’s amazing. I love it. Thank you.”

Oblivious to the pilot firing the flame to keep them aloft, Leo leaned toward Bianca and pressed his lips to hers. It was a quick kiss, but it had a big effect on the pounding of his heart.

If only they didn’t have an audience, he would pull her into his arms and kiss her deeply and thoroughly. Her sweet, sweet kisses were addictive.

She pulled back and gazed up at him with her big round eyes. “What was that for?”

He shrugged, not sure what she was thinking. “Just seemed like the right thing to do in the moment.”

A hint of smile pulled at her berry-red lips as she turned her head to the magnificent view. He gazed at the distant horizon, but all he could see in his mind’s eye was Bianca. 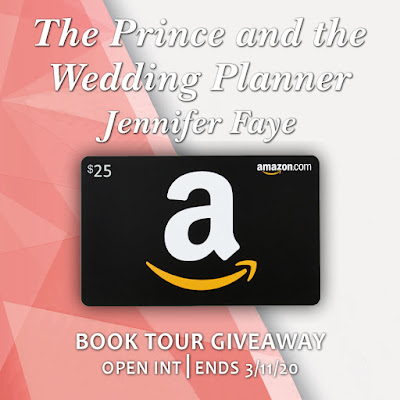