About Ghost Cat of Ocean Cove 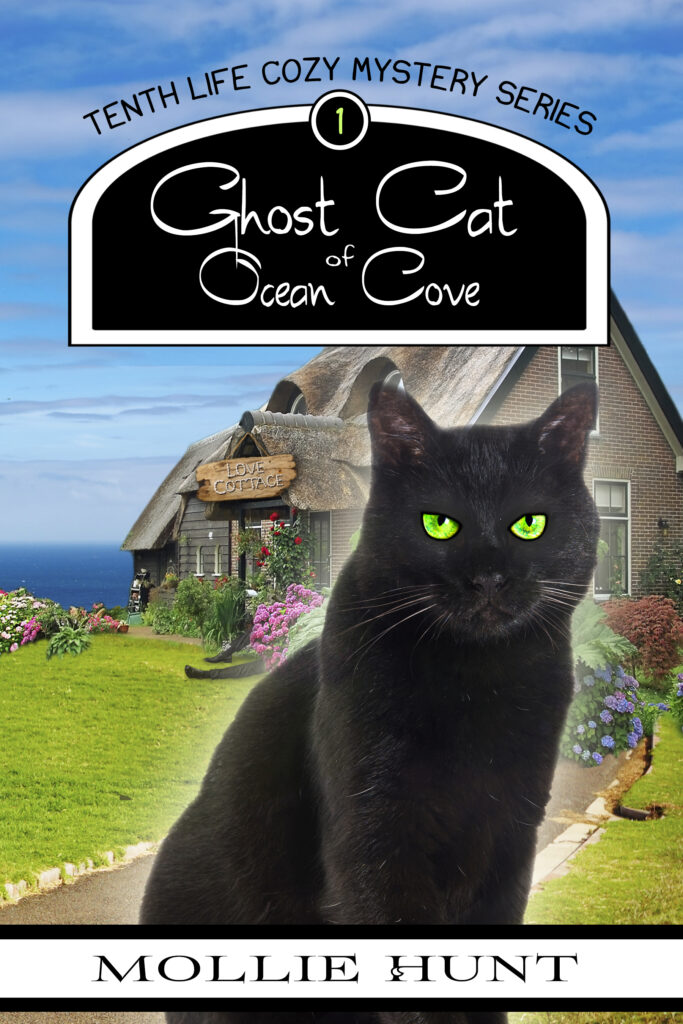 A new feline cozy from the author of the award-winning Crazy Cat Lady Mysteries.

Septuagenarian Camelia Collins and her cat Blaze move to the Oregon Coast to fulfill a lifelong dream, but that dream becomes a nightmare when Camelia learns she has purchased a murder house. The former resident, reclusive businessman Jonathan Chamber, was brutally killed on the stoop, and the killer is still at large.

What’s more, Camelia discovers an ancient gravestone at the back of her garden belonging to a cat named Soji. Dead long ago, this seventh black kitten of a seventh black kitten now returns incorporeal form. Will Soji’s haunting help Camelia solve the murder mystery or send her screaming back to Portland?

Chapter 1: Arrival and a Surprise

Camelia Collins hesitated, the key halfway into the lock. What on Earth have I done? she wondered to herself. How many people my age pick up and move house, leaving their old life behind to try something completely different and new?

Not many, she imagined, again pondering her sanity, but they probably should. After all, if one doesn’t follow one’s lifelong dreams by the age of seventy, when does one?

Turning, she surveyed the modest neighbor¬hood with its rustic homes perched on the bluff overlooking the sea. A rim of stunted pines clung to the edge of the cliff, and beyond that, Ocean Cove, where the surf beat upon the shore as it had done for millennia before and would do for millennia to come. Tiny and sheltered, its pebbled strip of shoreline curved in a flawless crescent.

Yes, this had always been Camelia’s dream. Now there she was, the dream come true. So why did she feel like she’d fallen into Alice’s rabbit hole?

Camelia returned her gaze to her new home. A rough driftwood plank hung by the front door, the words, “Love Cottage,” spelled upon it with seashells. Presumably the sign had been made by the Loves, the folks who had built the little cottage back in the fifties. There was already a house on the property when they purchased, so the story goes, but it had fallen into decay as places were prone to do in the wet coastal weather. Instead of sinking their nest egg into the old derelict, the Loves had opted for something fresh. They constructed the new house from scratch and zealously maintained it ever after. No one would guess by looking that it had stood its ground for over half a century.

Camelia shook off her wisp of apprehension and finished unlocking the door. Stepping inside, she gazed around the cheerful room with approval. She had bought the house furnished, and with a few minor adjustments, it would suffice until she had a chance to add her own personal touch. The bulk of her possessions would be arriving in a movers’ truck the next morning—then it would be perfect!

Again she marveled at her luck. Property on the Oregon coast was expensive, yet this one had been quite affordable. The inspection had turned up no surprises—the pipes weren’t broken nor was the roof falling in. The realtor had explained that the man who bought it from the Loves had died, and his beneficiary was looking for a fast cash sale. After a long and convoluted probate, the elderly European uncle wanted nothing to do with the place. Camelia figured his loss was her gain.

A folded sheet of paper sat propped upon the coffee table, “Mrs.” scrawled in bold cursive across the front. Camelia could guess what it was: a note from the cleaners she had hired to get things spick and span for her move-in. She glanced at it, read that all was in order and would she please pay the enclosed invoice in a timely manner. The charge seemed a bit high, but it was worth it to know the sheets were newly washed and any spiders that had moved in during the house’s three-year vacancy had been evicted from the eaves.

Camelia set the note aside and went back to the car to retrieve her overnight bag. Rolling it through to the bedroom, she smiled as she took in the bright, cozy space. A big window facing northwest would get the afternoon sun. A dresser, a wooden chair, and a single bed draped in a yellow chenille spread left her lots of potential to add her own special touch.

“Yes, this will do nicely,” she said out loud, her habit of talking to herself so well-established that half the time she didn’t know she was doing it. “Very nicely!” she added with glee.

Making a second trip to the car, she hefted a large cat carrier from the back seat. Its sulking inhabitant, her big tuxedo boy Blaze, gave a rauw of displeasure at the joggle.

“Can’t be helped,” Camelia told him. “I know how much you kitties hate change, but you’ll like this one, I promise.” 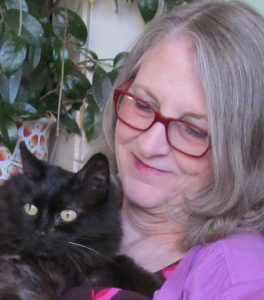 Native Oregonian Mollie Hunt has always had an affinity for cats, so it was a short step for her to become a cat writer. Mollie Hunt writes the award-winning Crazy Cat Lady cozy mystery series featuring Lynley Cannon, a sixty-something cat shelter volunteer who finds more trouble than a cat in catnip, and the Cat Seasons sci-fantasy tetralogy where cats save the world. She also pens a bit of cat poetry.

Mollie is a member of the Oregon Writers’ Colony, Sisters in Crime, the Cat Writers’ Association, and Northwest Independent Writers Association (NIWA). She lives in Portland, Oregon with her husband and a varying number of cats. Like Lynley, she is a grateful shelter volunteer.

Sign up for Mollie’s Extremely Informal Newsletter at: http://eepurl.com/c0fOTn.

September 9 – I’m All About Books – SPOTLIGHT

September 11 – I Read What You Write – REVIEW, GUEST POST

September 11 – Escape With Dollycas Into A Good Book – SPOTLIGHT

September 13 – Here’s How It Happened – SPOTLIGHT

Have you signed up to be a Tour Host?