Skip to Main Content
On Tour with Prism Book Tours
Note from the Author
Thank you for joining me for the Christmas in Bayberry blog tour!
I know it’s hot here in the northern hemisphere and not exactly Christmastime but… maybe that’s the best time to visit a small town in snowy Vermont. So grab a nice cold drink and curl up to take an armchair vacation in a warm, cozy town.
Bayberry, Vermont is one of those places where everyone knows your name and everyone helps each other out. And the heroine, Kate Taylor, can’t imagine living anywhere else. However, trouble looms for the biggest employer in the town and Kate’s family legacy, the Bayberry Candle Company.
Enter Wesley Adams, who is a business advisor. He’s sent to Bayberry to analyze the future of the candle company. And he’s anxious to finish his task as quickly as possible as he is in line for a big promotion back in New York City. But this isn’t his first visit to Bayberry and he fondly remembers Kate. But that had been back when they were kids. Everything has changed since then. Hasn’t it?
Join Kate and Wes as they partake in holiday traditions and take a stroll down memory lane. But will it be enough to overcome the problems in the present?
Happy reading,
— Jennifer 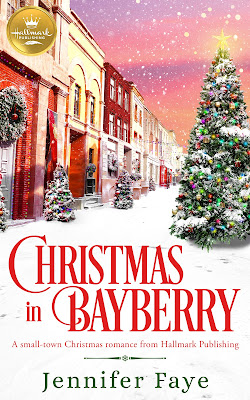 She’s trying to save the family candle company.
He’s trying not to fall for Bayberry—and her—again.

Kate Taylor knows what she wants in life: to one day run her family’s candle business, which is at the heart of the close-knit community of Bayberry, Vermont. But the company isn’t doing well.

Wesley Adams is on the fast track to be an assistant vice president at his financial firm in Manhattan. Before the promotion is announced, he’s sent to this small town from his past to do an analysis of the candle company.

He doesn’t expect to bump into his childhood crush, Kate, and when he does, sparks fly. As he spends time in Bayberry, he falls for the town’s Christmas traditions—and for her. But he has a responsibility to submit an honest report. Will it extinguish Kate’s dreams…along with any chance they have for a future together? 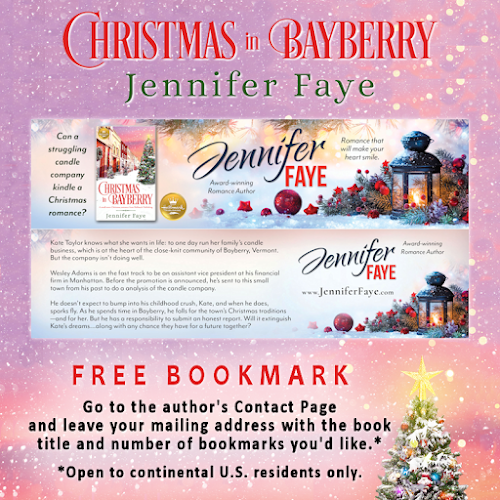 Go to Jennifer’s Contact Page HERE and order your bookmark(s)!
Please state the quantity you desire and which bookmarks/titles you are interested in.
Feel free to order extra to share with your favorite bookstore, library and family/friends.

NOTE: A big apology but due to postal fees, only available to continental U.S. residents.

He entered the very spacious corner office. The two outside walls were glass, giving a jaw-dropping view of the city. Right now, though, Mr. Summers had his full attention. Why did Chad think he was taking over Wes’s accounts?

Wes stepped up to his boss’s very large oak desk. “Here’s the file you requested. Everything should be in there.”

“Thank you.” Mr. Summers took the folder, then gestured to the two charcoal gray chairs in front of his desk. “Take a seat.”

Wes was torn between doing what the president of the company wanted or speaking up about his pending meeting. After all, Mr. Summers had the final say on who got the promotion. Wes had to stay on the man’s good side, but he also had to get his work done.

Mr. Summers leaned forward, resting his elbows on the large oak desk. “They can wait.” His gray brows drew together in a formidable line. “This is important.”

Wes had no idea why Mr. Summers was so worked up, but he couldn’t help but wonder if this had something to do with the promotion. Was Chad being promoted over him?

He took a seat, perching on the edge. Then realizing he needed to appear wholeheartedly interested in what Mr. Summers said, and not ready to rush out the door at his first opportunity, Wes slid back in the chair.

Mr. Summers got to his feet. “Can I get you something to drink?”

“Well, I think I’ll get something.”

The man was certainly not in any rush to get this conversation over with. Maybe the promotion had been decided upon early. And if it was bad news, he didn’t think Mr. Summers would waste time with pleasantries—in fact, he was quite certain of it. He wasn’t one to draw out bad news.

“Sir, I want to tell you how happy I’ve been here at Watson & Summers for the past nine years.”

“Has it been that long?”

“That’s good to hear.” Mr. Summers turned with a glass of sparkling water in his hand. “I know you’re up for the promotion.”

“Yes, sir.” He sat up straighter and smiled. “It’s an amazing opportunity.”

“You do know there’s only one spot open and a number of strong candidates.”

Wes could feel the promotion slowly slipping from his grasp. After being uprooted numerous times as a kid, moving from town to town, crisscrossing the States, he liked the thought of staying in one spot for the rest of his life. There was something to be said for putting down roots.

But if he didn’t land this promotion, he was going to have to rethink his plans. Manhattan wasn’t the cheapest place to live—far from it. As of right now, he didn’t have a Plan B.

Mr. Summers took a drink of water. He set the glass aside. “I have a way for you to gain an edge over the competition.”

Wes couldn’t help but be suspicious. Mr. Summers had never showed any favoritism toward him before, so why now? Still, he shouldn’t look a gift horse in the mouth.

“Thank you, sir. I appreciate this—”

Mr. Summers held up a hand to stop him. “You haven’t heard the plan just yet.”

Wes had a feeling there would be no chance of turning down Mr. Summers—not unless he also wanted to say goodbye to his bright future at the company. And that was not something he intended to do.

“I need you to go to Vermont.”

“Yes. Bayberry, Vermont, to be specific.”

“Bayberry?” Wes tried to process this turn of events. First his mother, now his boss. “Have you been speaking with my mother?”

“Your mother?” Mr. Summers’ forehead creased. “Why would I speak to her?”

Wes cleared his throat. “What do you have in mind, sir?” 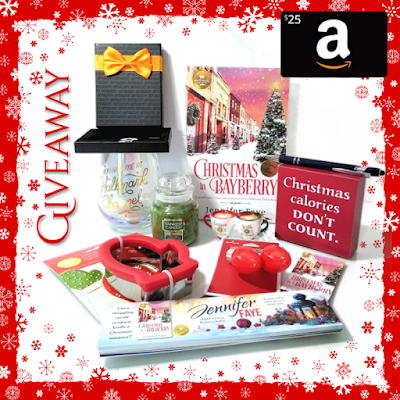