Welcome to the final Sneak Peek Saturday for HARVEST DANCE!😀

And that’s because HARVEST DANCE releases this coming Tuesday.

Did you pre-order your copy?

Here’s what one reader said about the book:

“I just finished the book and of course, I loved it. This series is one of your best 🙂 “

If you haven’t visited Bluestar Island yet, make sure you grab a copy of Love Blooms. 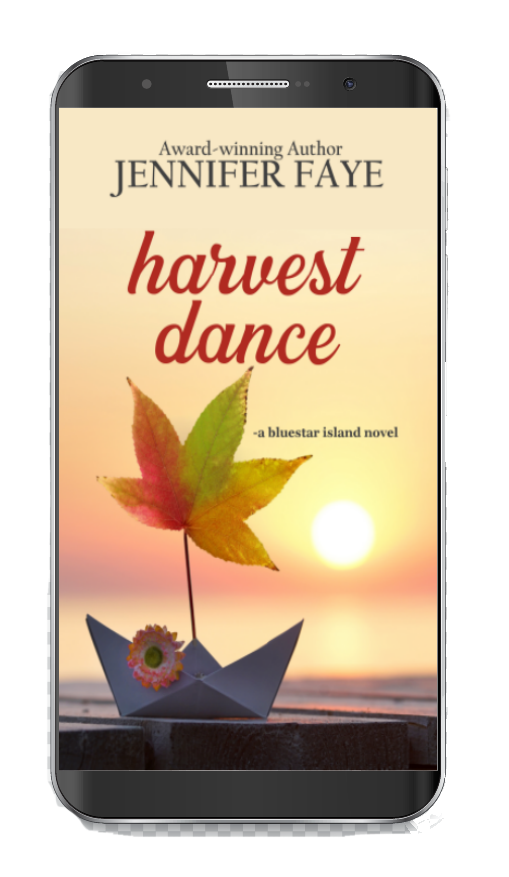 In his eyes she saw pain—a deep pain—the kind you didn’t talk about. She noticed the same thing about herself when she looked in the mirror. Sympathy welled up within her. She didn’t know what he’d been through, but having been through her own trauma, she understood this stranger a little better.

The sound of approaching voices broke the time continuum, and suddenly everything sped up. The rush of it all swept the air from her lungs. Had that really happened? Or had she imagined it all?

“Are you okay?” The tone of his voice had suddenly changed to one of concern.

She nodded. “I am. My foot just got caught when I stepped out of the cart.”

He let go of her, and suddenly the skin where he’d once been touching her felt chilled. She resisted the urge to rub her hands.

As curious onlookers ventured closer to find out the problem, Aster got pushed back toward the sidewalk. And that was fine with her. In fact, it was for the best. Because her reaction to this man’s nearness had shaken her to the core.

It didn’t matter how good-looking he was, how dreamy his baby blues were, or how his crusty exterior was a little bit of a turn on; she was not at all interested in getting involved with anyone. Not a chance. Not after what had happened to her in California. Just the scant thought of Oz left a sour feeling in the pit of her stomach.

The last she’d heard, they’d plea-bargained his case down to simple assault. Simple assault, really? It hadn’t felt so simple to her.

There was no trial. No one would hear her harrowing tale or see the scars she had to live with for the rest of her life. The thought that no one seemed to care what he’d done to her—what he’d do to the next unsuspecting women—made her sick.

His sentence had been knocked down to a year of house arrest. Soon he’d be free, but she was gone and she hadn’t left a trail. He was never going to find her on this small island. She hoped.

She shoved away the dark, troubling thoughts. They did not belong there on this sunny, carefree island. Bluestar was like a world unto its own. She glanced around, finding the crowd of onlookers had dispersed. She breathed a little easier.