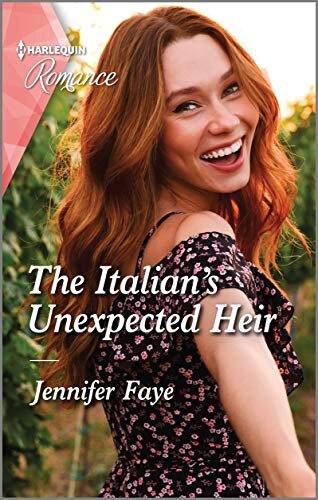 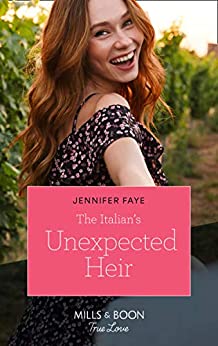 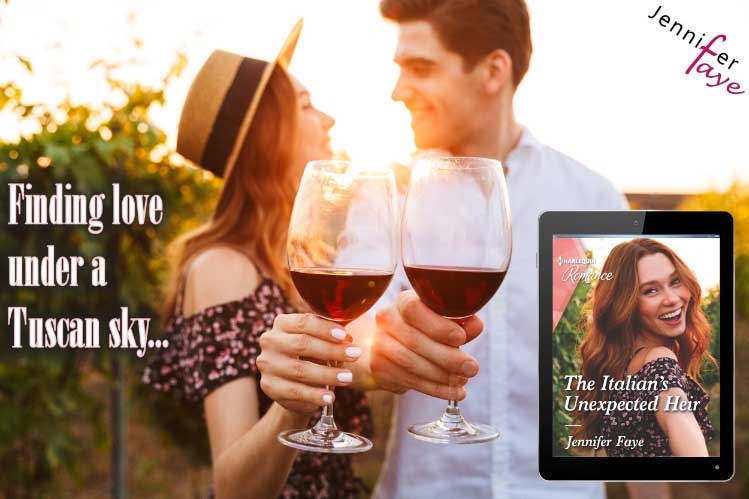 “Reading The Italian’s Unexpected Heir is a pleasure. You will love reading how Sylvie and Enzo’s love develops through the book, the discovery of Sylvie’s pregnancy, the threat to the vineyard, and the conclusion of the legacy. This delightful romance is a quick and enjoyable read. You won’t want to put it down!” Christy’s Cozy Corners

“. . . I have not read the other two, I did not have a problem following along. The author did a great job at providing a quick recap of the family history. . . . This book contains really well written characters, a heartwarming and at times heartbreaking storyline.” Because I said so — and other adventures in Parenting

Also in The Bartolini Legacy series:

“Congratulations! I knew you could do it.”

Enzo Bartolini turned to the beautiful woman standing next to him. The excitement in her voice and the sparkle in her eyes let him know she was more excited about this evening’s crowning achievement than he was. And that was the exact opposite of how things should be.

He was supposed to be the excited one—the one who felt as though he was on top of the world. This win was something he’d dreamed of for years. And now that it was here—now that he was holding the plaque with his name on it—the victory felt hollow.

The exhilaration he’d envisioned for this auspicious moment eluded him. The feeling of accomplishment—of finally being worthy of his father’s praise—was not to be. Shadows of the past smothered the brightness of the moment.

Still, Enzo forced a bittersweet smile to his face. In truth, he hadn’t truly won anything—at least nothing he felt worthy of claiming.

He’d encouraged his father for years to start entering his wine in competitions. Enzo knew the worldwide recognition would increase the demand for the wine and in turn raise its value. But his father had been stubborn, as usual. He’d said it was enough for him that he got to work the land each day and make a sizable profit. He didn’t need awards or recognition, too.

However, Enzo needed it. He needed something to fill the huge gaping emptiness inside his chest. It had once been filled by the constant love of his parents, but they had been ripped from his life. In the time it took his parents to drive to the city for what? Groceries? Supplies for the vineyard? Whatever it was they’d set out to do that day, it had led to a horrific accident and forever changed the lives of their son and two daughters.

When Enzo had insisted on seeing the accident photos, his stomach retched. Perhaps he shouldn’t have insisted. Perhaps he should have just taken the word of the police. But he’d been in shock, unable to process a life without his very dynamic parents in it. He’d demanded proof.

And then he’d been shown the photos. He’d only needed to see the one—the photo of a tangled-up piece of metal. It hadn’t even resembled a car any longer. There was no chance his parents could have survived. None at all. Thinking there couldn’t be anything else to compare to that devastation, he’d been wrong.

Enzo pushed aside those troubling thoughts. Tonight was all about the win. At last, there was once again something good in his life. So then why didn’t it feel good? Why wasn’t he on top of the world?

He reached to undo his black bow tie as well as loosen the top button of his white dress shirt, when Sylvie said, “Don’t. Not yet. I need a picture of you first.”

His hand hesitated in midair before he lowered it to his side.

Over the past several months, Sylvie DeLuca had become a good friend. She had the brightest smile—like the one she was flashing him now. And she was a good listener—though he usually didn’t have much to say. However, tonight, beneath the Parisian moonlight, he noticed her incredible beauty. How exactly had he missed it all this time?

“This is it!” Sylvie tugged on his arm. “We can take the photo here. It’ll look amazing.”

He stopped and glanced around. The Eiffel Tower was all lit up against the dark sky. So clichéd. And yet so utterly stunning.

“Stand right there.” Sylvie pulled her phone from her sparkly black purse. “Turn to me.”

She went from being a businesswoman in her smart tailored suits to a stunning siren who could turn all of the males’ heads—his most especially. And it was making him quite uncomfortable. He wasn’t sure what to say or do around her.

Because what he wanted to do now was pull her into his arms and kiss those very sexy, very tempting lips. But he resisted—just barely. They were friends. Nothing more. Even if she did look like some sort of goddess in that dress and that makeup that highlighted her alluring eyes, her high cheekbones and kissable lips. Wow!

She signaled for him to move to his right. “A little more. Perfect.” She held up her phone to snap a picture.

“Oh, no.” In the glow of her smile, he felt his dismal mood begin to lift. “You have to come over here and have your picture taken, too.”

Sylvie shook her head. “Not me. I didn’t do anything special tonight. You’re the man of the hour.”

“But without you, I might not have entered.” It was true. She’d nudged him into submitting his wine to the prestigious contest.

Was that a blush? He looked harder but it was too dark to be sure. Maybe it was just that he was starting to know her well enough to know his words would cause her cheeks to pinken.

Tonight hadn’t been some small, local contest. This had been an international event with worldwide recognition. He honestly hadn’t thought their small winery had any chance of winning against the big establishments. But Sylvie had insisted he would never know unless he entered. And so he’d decided he had nothing to lose and entered.

She snapped a picture. The flash lit up, blinding him for a moment.

“No. That won’t do. I want one of us together, so I’ll have it to remember this night.” It wasn’t until the words were out of his mouth that he realized how they might sound. Or maybe he was just being paranoid because he was having this very intense, undeniable attraction to her. His sister’s friend—his friend.

He knew following this attraction through to its logical conclusion would be a mistake. Sylvie wasn’t a one-night-stand kind of woman. She was a let’s-get-to-know-each-other-fall-in-love-and-get-married type of woman. And that was the exact wrong type for him at this point in his life.

He stopped his rambling thoughts. What had gotten into him? He never allowed his thoughts to go in this direction with Sylvie. So why tonight? Was it being in Paris together? Was it one too many toasts to his winning success?

He latched on to the last thought and clung to it like it was a life preserver and he was a man adrift in a big, stormy sea. Or did he have it all wrong and Sylvie was his life preserver?

The next thing he knew, she was standing next to him. It was only natural to put his arm around her—for the picture, of course. But then she leaned into him, sending his heart racing.

Just ignore it. You’ve got this.

“Smile,” he said—at least, he thought he said it. It was so hard to tell because he couldn’t hear his thoughts over the echo of his heartbeat.

He snapped the picture. There. It was done.

There was a little voice in his head that said he should get while the getting was good, but that thought was drowned out by the thumping of his heart. It was just a picture. And she was just a friend.

He once more held the camera out in front of them. “Okay. Are you ready?”

When she didn’t respond, he turned to look at her. It was the same moment that she turned her head to look at him. And with those stiletto heels, she was closer to his height.

When he thought back upon this moment, it would be the defining moment. This was when he should have turned away instead of staring deeply into her warm brown eyes that were so expressive. And right now they were saying that she wanted more from him than their platonic friendship. And so help him, so did he. So much more.

Her breathing was soft and shallow.

Sylvie felt as though she was having an out-of-body experience. Maybe that was what she needed to tell herself in that moment to give her the courage to reach out to Enzo. Her hand cupped his freshly shaved cheek.

If she didn’t do this now and quickly, she knew she would lose her courage. And though she’d been thinking about this for the longest time, if she didn’t act now, she would never fulfill her wish. And the one thing she’d learned in her short life is that you had to grasp the happy moments because they were fleeting and few.