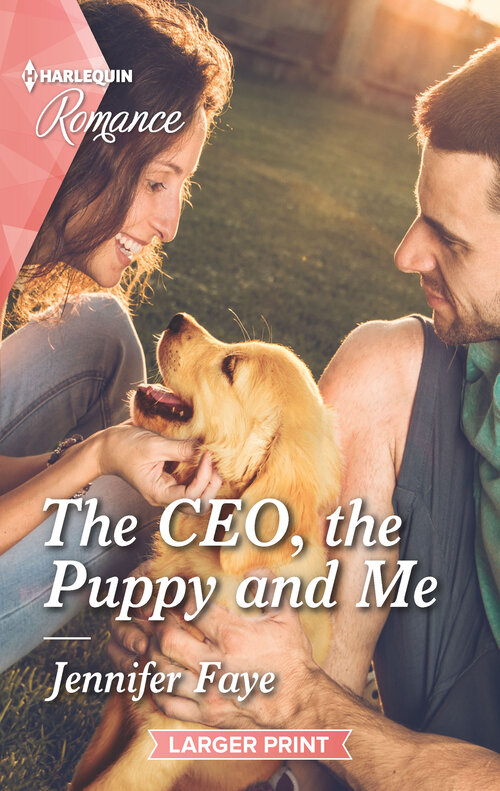 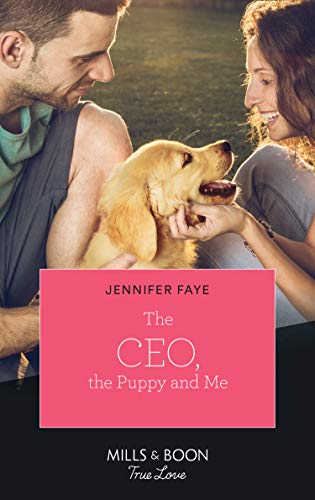 The CEO, The Puppy and Me

Has the search for her past…

…guided her toward her future?

Gia Bartolini’s determinedly searching for her real father. First stop on the enchanting Italian island of Lapri? A mysterious abandoned mansion…where, rescuing a trapped puppy, she falls straight into the arms of alluring Riccardo Moretti! Her passion for the all-business CEO burns bright, leaving Gia with a question: In uncovering her true roots, has fate led her to true love? 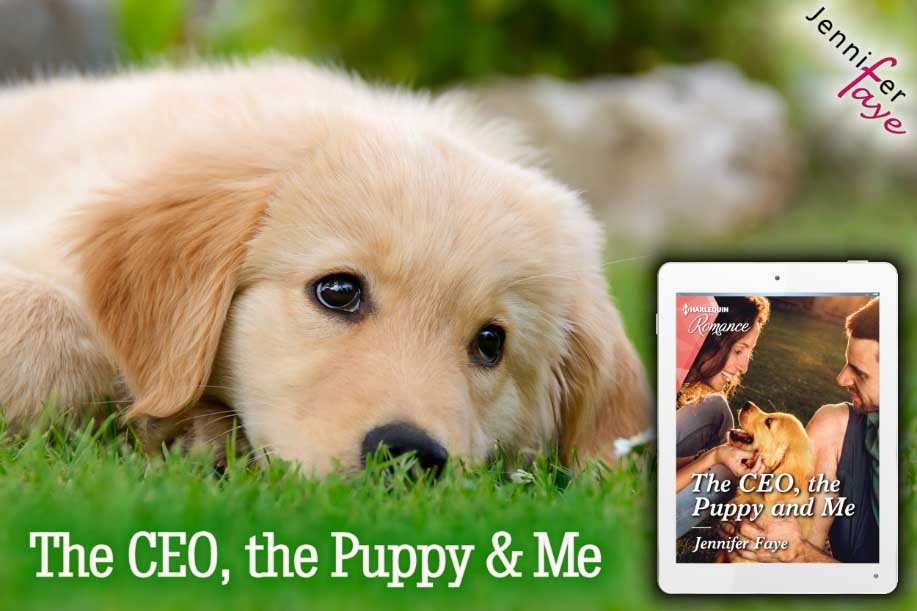 “I found The CEO, the Puppy and Me to be a lovely, endearing story! . . . I enjoyed the interactions Gia and Ricardo have with one another, and there is a puppy that keeps their ties strong! . . . I highly recommend Gia and Ricardo’s love story for those seeking a sweet, lighthearted read!” Woven From Words

“The CEO, The Puppy and Me is a quick read because you won’t want to put it down. The story flows beautifully. Jennifer Faye has created a truly touching love story that encompasses not only romantic love but also familial love. . . . If you’re looking for an escape from this complicated world we’re living in, look no further. You’ll love this sweet story.” Christy’s Cozy Corners

“I found The CEO, the Puppy and Me to be a lovely, endearing story! . . . I enjoyed the interactions Gia and Ricardo have with one another, and there is a puppy that keeps their ties strong! . . . I highly recommend Gia and Ricardo’s love story for those seeking a sweet, lighthearted read!” Woven From Words

Also in The Bartolini Legacy series:

The moment Gia Bartolini and her two siblings, Enzo and Bianca, had been waiting for.

And yet this was also the moment they’d been dreading.

On this sunny June day, their lives were about to be once more upended. And worst of all, it could be any one of them who received the devastating news—that they were not a Bartolini.

After their parents had unexpectedly died in an auto accident a few months earlier, their lives had never been the same. Her older sister, Bianca, had found their mother’s journal, which contained a secret—a big secret, a huge secret. Their mother had had an affair years ago, and one of the siblings wasn’t a true Bartolini.

And to make matters worse, their parents had spelled out in their will that only one of them would inherit their childhood home—a vast estate and vineyard in Tuscany. The two remaining siblings would inherit an equal fortune in cash and investments. But all three of them wanted their home—well, that was until Bianca had literally found her Prince Charming. Now she was about to become a princess, and that left Enzo and Gia in the contest to figure out who would lay claim to their childhood home and the family business. Talk about a complicated situation.

Within the Tuscan villa, Gia wrung her hands as her gaze moved around what had until recently been her father’s study. While the rest of the house had been remodeled into a boutique hotel, she’d strived to keep this room as her father had left it—warm and cozy. The place where she’d spent countless hours as a child getting help with her homework. Now it was the boutique hotel’s office—her office.

The Barto Villa had had a slow start. However, when Bianca agreed to be the wedding planner for the prince of Patazonia in exchange for a media campaign for her wedding business based here at the villa, the hotel business had boomed practically overnight.

The increased business meant Gia had to hire a couple of assistants to help manage the place. Michael, her manager, had moved there from Florence with his young family. Rosa, her assistant manager, was an older local woman with an incredible ability to keep everything organized. Together, they kept the hotel running smoothly.

Upon Bianca’s acceptance of the prince of Patazonia’s marriage proposal, they all knew things would have to change once more. Bianca had to let go of her wedding planning business in order to assume her new responsibilities—first as a princess and a short time later as the queen.

Not wanting the wedding business that meant so much to her to die, she’d put her assistant, Sylvie, in charge of upcoming weddings, and Bianca flew between the vineyard and the palace on a regular basis, making sure everything in both places was running smoothly.

And then there was Enzo. He’d given up his work in France, where he’d married some of the world’s finest grapes to create the most amazing wines, in order to return home and take over the Barto Vineyard. Would he regret that decision if he were not a Bartolini?

Gia’s gaze moved around the room. Each sibling had consciously or unconsciously taken a seat on a different side of the room from the others. Their parents’ deaths had divided the family. And Gia didn’t know if they’d ever be close again.

Even though it was a summer morning, a distinct chill hung over the room. Gia folded her arms across her chest. She’d never felt so worried and—and scared. Yes, she was scared of what the DNA results would reveal. Would her family—the only family she’d ever known—be able to navigate past this?

She had absolutely no idea. Her mind was reeling with all the possible scenarios. None of them were good. All of them had heartache and pain. It wasn’t right. And it was her parents’ fault. They’d done this to their own children. What kind of parent held on to such an important secret for so long?

What if she wasn’t a Bartolini? She quickly dismissed the idea. That couldn’t be the case. Even Bianca had pointed out that Gia had been her father’s favorite. It wasn’t something that she would ever admit to anyone, but her father used to spend extra time with her, teaching her how to ride a horse, how to pick a grape at just the right time. When she was little, he would carry her around the vineyard on his shoulders. No matter how busy he was, he made time for her.

But that knowledge and those memories didn’t lessen the significance of this moment. No matter what, three lives were about to change. And Gia didn’t like change. She liked routine. She liked the reassurance of knowing what to expect. And right now, she had no idea what to expect. Would it be Bianca? Or Enzo?

Her heart went out to them. She couldn’t imagine what it must be like to be facing such a great unknown. She would be there for them, doing what she could to lessen the blow. She loved her siblings with all her heart—even if things had turned turbulent lately.

But if Aldo Bartolini wasn’t the biological father of one of them, who was? And why had their parents kept it a deep dark secret? The questions nagged at her.

Gia clenched her hands together, noticing a slight tremble. She wanted to stand up and tell the attorney to burn the unread DNA results—let everything go back to the way it used to be. Back to when her overprotective brother gave her dates a stern warning about dealing with him if they did anything to upset his little sister. Back to the times when she and her sister could spend hours on the phone talking about absolutely nothing in particular and yet ended up talking about everything.

“Thank you all for coming,” said the attorney, Mr. Lando Caruso. The older gentleman sat behind what had been her father’s desk as though it were his. “I know waiting for these results hasn’t been easy. So I’ll dispense with any advice except to tell you that these results in no way change the will that your parents left behind.”

Gia’s insides shivered with nerves. This was it. This was the last moment all three of them would be a full-fledged family. Her gaze watched the attorney as he used her letter opener to slice open the white envelope.

It was as though time slowed down and her heart pounded louder. She rubbed her moist palms together, squeezing her laced fingers. She didn’t know what to wish for when he read the results. She didn’t want either of her siblings to feel as though they were any less a Bartolini.

The attorney unfolded the sheet of paper. He adjusted his reading glasses, and then his gaze skimmed over the page. “There’s a bunch of legalese and scientific lingo that I’m sure none of you are interested in at this moment.” He was quiet for a few seconds “Ah, here we go. The lab has confirmed that two of you are indeed the biological children of Aldo and Carla Bartolini—”

“Who is the unlucky soul?” Bianca pressed.

“Yes,” Enzo interjected. “Let’s get this over with.”

Gia remained quiet. After all, this wasn’t her crisis. Not really. She was an observer.

The attorney folded the paper, took off his reading glasses as his gaze met with each of them. There was regret and sympathy emanating from his eyes. Then he cleared his throat. “I’m sorry to say that the Bartolini sibling who is not Aldo’s biological child is… Gia.”

This can’t be right. There has to be a mistake.

The attorney looked at her with pity. “I’m sorry, Gia.”

And yet it was happening. To her.

She sprang out of her chair, which toppled over. She backed up, stumbling into it.

I am the outsider.

It was at that precise moment that her world came to a screeching halt. She wasn’t even sure she was still breathing because the attorney’s words sucked the oxygen from the room.

The words swam around in her mind at a dizzying pace. Her stomach churned. She didn’t move. She didn’t speak. Was it possible this was just some horrific nightmare? Her gaze moved around the room. They all looked at her with pity in their eyes.

It’s true. She inhaled a sob. I’m the outsider.

Each admittance was like a dagger to her heart. The scene before her blurred. She blinked repeatedly. How did this happen? Why her? Not that she’d wanted it to be her brother or sister either. Why did it have to happen to any of them?

The next thing she knew, Enzo and Bianca were beside her. Bianca enveloped her unmoving body in a big hug. She wasn’t sure what Enzo did because she just couldn’t process anything. She vaguely heard the deep timbre of his voice. It was the words he spoke that eluded her.

I am not a Bartolini.

Her world had gotten smaller and smaller until she was caught up in her own thoughts—disturbing thoughts. Painful thoughts. Anguished thoughts.

I am not a Bartolini.