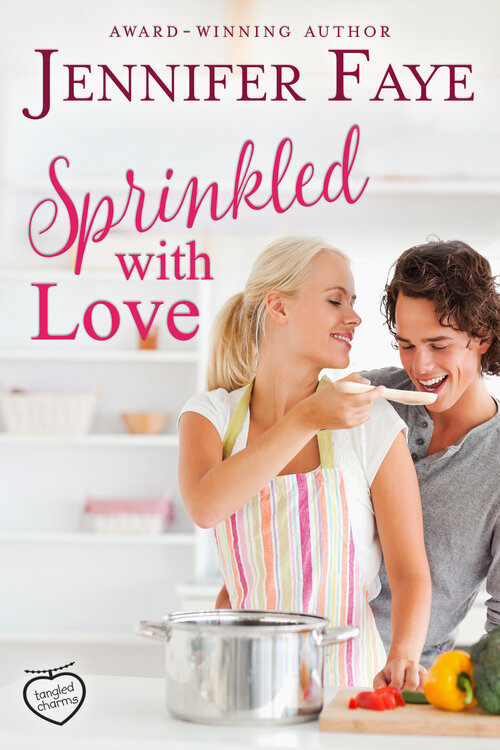 What does one do with a matchmaking cat named Romeo?

Spirited and beautiful, Jillian Parker is one of Marietta’s newest business owners. Still, her mother worries about Jillian’s bare ring finger. So in order to give her mother something else to fuss over, Jillian adopts a cat named Romeo. He turns out to be anything but a docile lap cat.

One snowy night, Romeo makes a break for it. With Jillian right on his heels, they have a near miss with a passing pickup driven by Avery Wainwright, one of Jillian’s closest friends. A rodeo accident has the sexy cowboy returning home to recuperate, and he’s not happy about it.

So when Avery finds himself lassoed into the Bachelor Bake-Off, he turns to the one person who has always helped him out—Jillian. But will teaching him to take chances outside of the show ring have them both discovering that their feelings for each other run much deeper than they ever imagined?

NOTE: Can be read as a standalone. Contains its own HEA. 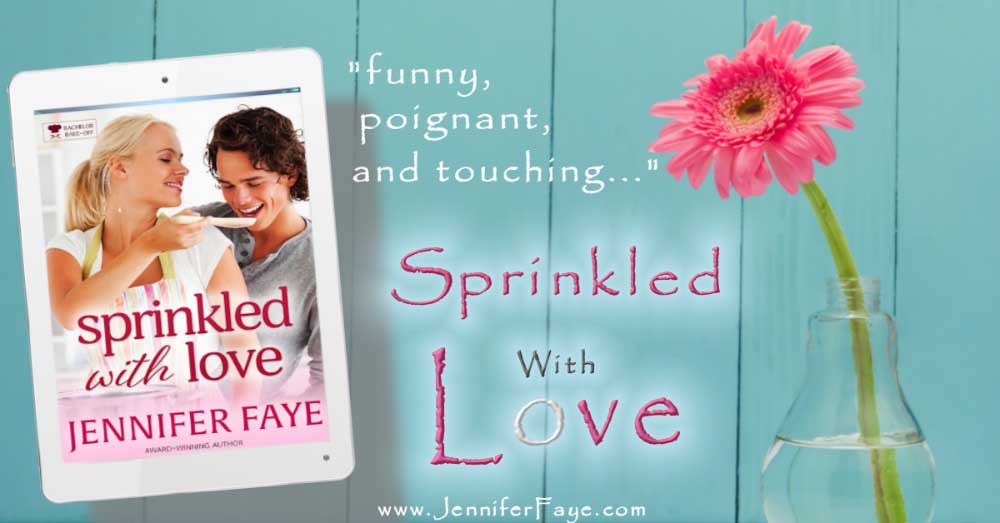 A gust of frigid air rushed inside the warm interior of Jillian Parker’s cozy garage apartment. With it being January, Old Man Winter had taken a firm hold on the small town of Marietta, Montana. And it wasn’t looking to let up anytime soon.

“Thank you for watching Romeo, dear,” Jillian’s mother said as she stepped inside and pushed the door shut.

“No problem.” Jillian glanced up from where she stood in the galley kitchen of her recently remodeled apartment situated behind her mother’s house. She’d just pulled two mini-muffin pans from the oven and placed them atop the stove to cool.

Her mother stood in the small entryway holding her newly adopted black and white cat named Romeo. Her mother hugged the tuxedo cat. It amazed Jillian how docile Romeo was in her mother’s arms. It was as though he were nothing more than a plush stuffed animal.

Last week, Jillian had adopted Romeo from an animal shelter to keep her mother company. Jillian had been hoping her mother would fuss over the cat and worry less about her. So far her mother had managed to mother both of them without missing a beat.

Her mother tilted up her chin and sniffed the air. “Mm…what smells so good?”

Tomorrow all of her carefully laid plans would become a reality. Not only did she have an online business for her handmade jewelry, but now she’d also have a physical store where she could sell her designs and have a dedicated work space.

“I’m so excited for you. I’ve been spreading the word about the opening,” her mother said. “Hopefully you’ll have a big turnout.”

“That’s what Suzanna and I are hoping for.” Suzanna was Jillian’s best friend. With each of them being artsy, they’d decided to pool their resources and go into business together.

Her mother smiled. “I’m so glad you moved in here. Now I get to see you all of the time.”

“You make it sound like I lived so far away. I was just on the other side of Marietta. It was within walking distance.”

“Still, this is so much better. And it makes it convenient for you to watch Romeo. I didn’t want him to feel like I was abandoning him by leaving him home alone.”

Her mother shrugged. “It doesn’t mean he doesn’t have feelings too. So thank you.”

“I don’t mind. I didn’t have anything else planned for this evening.”

“You know if you hadn’t broken up with Glenn, you’d have plenty to keep you occupied—”

“Mom, we talked about this already. It’s over. End of story.”

Her mother arched a brow before she placed the cat on the floor. “You know you can’t always be so picky. If you ever want a family, you’re going to have to settle down with someone.”

This was the same thing her mother had been telling her for the past two years, ever since her twenty-fifth birthday. All of her friends and cousins were getting married and settling down. And with her cousin’s wedding the following weekend, her mother was campaigning more ardently than normal for Jillian to find a significant other.

She knew her mother’s ultimate hope was for grandkids, but Jillian wasn’t sure that was ever going to happen. Right now, her focus was on her business—a business that fulfilled her and gave her a sense of accomplishment.

“I just don’t want to see you grow old alone. It isn’t all it’s cracked up to be.”

In that moment, Jillian’s frustrations with her mother ceased. She realized just how lonely her mother was without her father. Even though it’d been more than five years, her mother hadn’t moved on. Every time Jillian prompted her mother to start dating, she would resist. Her mother kept saying that Jillian’s father was the love of her life. Jillian couldn’t help but wonder what that sort of love must be like.

So far, Jillian had dated a guy who was more like a kid than a man. Then there was the guy who wanted to jump the gun and talk about marriage on their second date. Their second date? Really?

And the latest had been Glenn. He had seemed like such a nice guy, but he just couldn’t understand Jillian’s need to build a successful business. And he definitely didn’t approve of the long hours she spent filling online jewelry orders and building up her inventory for the grand opening.

So for now, she’d written off guys in order to focus on her career.

Her mother walked up to her and pressed a hand to her arm. “I know you’re really enjoying your business, and I’m so happy for you. Your father would have been so proud. But someday you’ll come home and find that you have no one to share your day, celebrate your accomplishments, or hold you when life doesn’t go as planned. Just remember, life is all about balance, my dear. It can be tricky, but if you succeed, it’s the most amazing thing.”

“I know, Mom.” Jillian placed her hand over her mother’s. “Just give me some time. After all, Glenn and I just broke up.”

“That’s true.” Her mother withdrew her hand. She moved to where Romeo was sitting on the floor washing his paw and she leaned over to run her hand down his back. “You be a good boy.”

In response, Romeo purred loudly. His paw lowered to the floor and he stretched his neck. Her mother scratched behind his ear as his golden eyes drifted halfway shut. He was such a ham. And her mother was more than happy to dote on him.

Jillian struggled to hold back a laugh. If she’d known her mother would take to having a cat this well, she would have adopted one years ago.

“Have a good time with your friends,” Jillian said. “And be careful. We’re supposed to get six inches of snow tonight.”

“Always, dear.” Her mother moved to the door and paused. “I’ll be back in a couple of hours. Do you need anything while I’m out?”

“Thanks. But I’ve got everything covered.”

“Toodles.” Her mother let herself out into the frigid night.

Jillian watched as the door closed. Right now, her mother had more of a social life than she did. Still, things could definitely be worse. But cat-sitting? Really?

Then a worrisome thought came to her—was this a sign of things to come? She tried to imagine her life a few years from now. Would she end up a lonely spinster with a dozen cats?

Jillian watched as Romeo meandered into her black and white decorated kitchen and plopped himself on the black rug in front of the still-warm oven. He was pretty cute. She continued to watch as he washed his tail. But she was a long ways off from settling down with a bunch of furbabies. After all, she wasn’t that old. And she had too many goals to accomplish.

Jillian moved toward the cat and knelt down to pet him. She started at the top of his head and worked her way down to scratch behind his ear. Romeo’s purr grew louder.

“You really are a cutie.” Jillian kept petting him. “But I honestly think you could have stayed home alone. I don’t think you’re as needy as you lead my mother to believe.”

Jillian straightened and slipped on her coat. She wanted to take out the garbage before the snow got any worse. She grabbed the bag from the kitchen garbage can and opened the door of her apartment.

She turned around to pull the door shut when she caught a streak of movement out of the corner of her eye. She turned and stared into the night. As she squinted, she made out Romeo’s silhouette. Oh no!

A pampered indoor cat wouldn’t know how to take care of himself outside. He would end up lost. And to make matters worse, the temperature was below freezing. Talk about a recipe for disaster.

The little scamp didn’t stop. He headed straight for the road. Where was he going?

Jillian dropped the garbage and yanked the door shut before setting off, running after the cat. She’d never thought about it before, but tracking a black cat at night was definitely going to be a challenge. And she didn’t even have a flashlight.

“Romeo.” She strained her eyes, trying to see into the dark shadows of the evening. “Romeo, please come here.” She stuffed her bare hands in her coat pockets. “Come on, kitty. It’s cold out. If you come here, I have a can of tuna with your name on it.”

And then she spotted the white on the tip of his tail. Romeo paused between two houses on the next street. She slowed down, not wanting to scare him. If she lost this cat, her mother would be so upset. Was it possible to be a failure at cat-sitting? It’d be just her luck to be the first. She just couldn’t tell her mother that her beloved cat had run away from home. Her mother would never trust her again.

Jillian moved cautiously. She was now within two feet of Romeo. Success was within her grasp. She could feel it. She bent over to pick him up, but all she grasped was air as Romeo darted forward out of her reach.

Jillian groaned in frustration. She straightened and snuggled deeper into her winter coat. How could this cat prefer the cold to the warmth of her apartment? Cats made no sense to her.

Romeo ran out from between the two houses and headed straight for the street. He certainly seemed to know where he was going. But how was that possible when he was new to Marietta? And he was a house cat?

He paused next to a tree to sniff something. This was her chance. She moved with cautious and calculated steps. Soon she’d have that ornery cat in her arms and they’d be headed home. She rubbed her bare hands together, trying to keep them warm. Home—the thought of her cozy, warm apartment called to her.

Jillian lunged for the cat, but Romeo sprang into action and dodged out into the street. Jillian glanced up just in time to see the headlights of a vehicle headed straight for Romeo.

Intent on preventing a tragedy, Jillian stepped into the road.