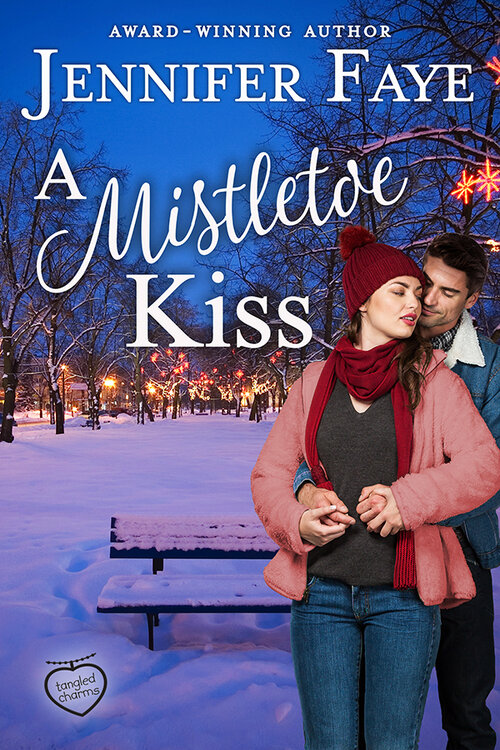 Jaded by love, Suzanna Simms has resigned herself to focusing on her art business. But with Christmas quickly approaching, she receives word that her family is returning to Marietta. And Suzanna failed to mention that her latest relationship had ended abruptly. Now she’ll have to admit to her family that she failed at love—again.

Enter Sergeant Jake Hamilton, a new resident to Marietta and Suzanna’s next door neighbor. He’s not looking for anything permanent, he’s just passing through Marietta for the Christmas season, hoping to keep to himself. But when Suzanna’s family mistakenly assumes that Jake’s her boyfriend, he agrees to continue the charade.

Suzanna is certain she’s immune to his rugged good looks and sexy smile until they find themselves standing under the mistletoe. When Jake finds her kiss sweeter than her sugar cookies, he knows he’s in trouble. But it’s too late by then… the Christmas charade is on.

NOTE: Can be read as a standalone. Contains its own HEA. 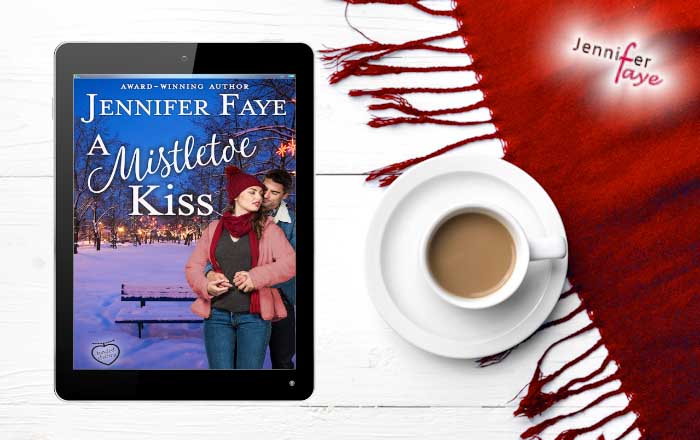 There was something in the air…

Change was coming to Marietta.

Or more than likely it was a bit of wishful thinking.

Tomorrow was the first of December, when the Christmas frenzy kicked into high gear. Suzanna Simms usually found this to be the most fabulous time of the year. But this year, she just wanted the holidays to quietly pass her by. She rushed into the kitchen. Her gaze immediately moved to the clock on the microwave. It blinked “PF.” Power failure. Apparently the power had gone off last night just long enough to reset all of the clocks in the house, including her alarm clock.

A glance at her phone let her know she only had two more minutes before she was late for work. That never happened to her. She hated to be late for anything. And today they were switching the autumn decorations for Christmas ones at her jewelry/craft shop, Tangled Charms.

Suzanna grabbed the coffeepot and poured it into her mug. She’d never make it through the morning without some strong caffeine. She glanced in the kitchen cabinet for the lid. Suddenly the hot liquid scorched her skin. She righted the coffeepot. Setting it aside, she rushed to the sink. As cold water soothed the burn, she assured herself there was definitely something amiss in the air.

She glanced down at Pixie. “Hey, girl. I didn’t forget you. Honest.”

The black-and-white six-month-old kitten rubbed affectionately over Suzanna’s legs. Suzanna bent over and scratched behind Pixie’s ear. When Pixie wasn’t testing her boundaries, she was the sweetest furbaby. And she wanted her breakfast. First, Suzanna sopped up the coffee from the countertop. And then she placed a bowl containing canned cat food on Pixie’s mat. Satisfied that her morning chores were complete, Suzanna slipped on her coat and red scarf.

With her coffee in one hand and her oversized purse slung over her shoulder, she rushed out the door of her townhouse. A gust of icy cold air rushed past her. She snuggled deeper in her coat. December had blown in with a distinct chill. And so another blustery winter was about to descend upon Marietta, Montana.

She was halfway down the sidewalk when she spotted movement out of the corner of her eye. She turned her head to find a big—make that a ginormous—brown-and-white Saint Bernard running toward her. Its ears flapped as it ran and its jowls did the same. The closer it got, the bigger it seemed. Why couldn’t it be a Chihuahua or a Yorkie?

The breath caught in Suzanna’s throat as her palms grew clammy. Please stop.

She took a step back. There was no way she was going to outrun that dog. It let out a deep bark. Woof-woof.

And then all two hundred pounds or so of the dog was standing in front of her. She stared at it and it stared back at her with big brown eyes.

She should say something—do something, but panic had her tongue stuck to the roof of her mouth. And her heart felt as though it were lodged in her throat. She’d been afraid of dogs since she’d been bitten when she was young.

She should look around for someone to help her, but she didn’t dare take her gaze off the

dog. The dog began sniffing her shoes and her jeans. What was it thinking? The dog circled her—

“Rufus, what are you doing?” asked a male voice.

The dog glanced up. Woof!

Once the dog ran to the man, Suzanna relaxed her stiff muscles and glanced over at the man.

“Don’t worry. He won’t hurt you.” The man sent her a friendly smile as the dog sat down next to him.

It was cold out, quite literally, and here this man was strutting around outside in a short-sleeved black T-shirt. It clung to his muscled chest, broad shoulders, and bulging biceps. She swallowed hard and struggled to recall what she’d been about to say.

Her gaze lifted up and up. My he’s tall. At least six feet of muscle. His jawline was chiseled with some scruff on it. His hair was short—like military short. And his eyes were blue. Not just blue. But a sky blue, the kind that she could get lost in for hours. He was quite a sexy package.

“You must be my new neighbor.” The townhouse next to hers was up for rent. She just hadn’t realized anyone had moved in.

“Guilty as charged. I’m subletting the townhouse until the lease is up in January. As for Rufus, he didn’t mean any harm. Huh, boy?” The dog barked in agreement.

She kept an eye on the dog to ensure he didn’t come too close. “It’s nice to meet you.”

The man looked at the dog. “Stay.” Then the man approached her and held out his hand. “The name is Jake. Jake Hamilton.”

She slipped her hand in his large hand. His warm touch sent a shower of awareness up her arm. “Suzanna Simms.”

When he smiled, her stomach dipped. “It’s nice to meet you, Suzanna.”

“And you already know Rufus.”

She doubted that would happen. With her past experience with dogs, it was best to keep her distance—from the dog…and his too-good-looking owner.

She was on a run of bad luck with men—first being dumped at the altar and then having a ten-month relationship end abruptly a few weeks ago. Didn’t they say bad luck came in threes? She wasn’t ready to take on number three. She needed a man-free holiday.

“Have you lived in your townhouse long?” Jake asked.

She gave it a little thought. She’d moved here after her engagement imploded. “I’ve been here almost two years.”

“Welcome to the community.”

“Thanks. Maybe you could tell me the good places to eat around here.”

“Not a problem. I’m sure we’ll see each other around.”

She turned toward her car just in time to spot Rufus in her yard. He raised his leg and with perfect aim, he nailed the welcome sign in her yard.

Suzanna glanced back at Jake to see if he was going to do something with his dog that was now standing between her and her car.

With a sheepish look, Jake said, “At least it wasn’t a Christmas decoration.”

“Oh.” Jake shifted his weight from foot to foot. “Sorry about that.” He turned to the dog. “Come on, Rufus. I think you’ve caused enough trouble for one morning.” Jake turned back to

her. “I’ll put him on a leash from now on. He’s just not used to such a small yard.”

Without a backward glance, she headed for her car. Lucky for him, she’d never liked that welcome sign. The colors were all wrong and she wasn’t a lizard fan. Her great-aunt was a huge fan of clearance sales. Her aunt’s approach to shopping was the cheaper, the better.

Last Christmas, her father had received a pair of lime-green socks with an alligator on the side. Her mother had been fortunate to receive a beautiful calendar of roses, however the calendar expired precisely six days after she’d received it. Yep, her aunt had purchased a calendar for the current year. They never knew what they were going to get for Christmas from Aunt Bea. It definitely kept the holiday interesting.

Once in her car, with the heater cranked up, Suzanna grabbed her phone. She rang the shop to let her partner know she would be there shortly, but there was no answer. It appeared she wasn’t the only one running late.

She dropped her phone in her purse and backed out of the driveway. As she drove away, she glanced in her rearview mirror. She noticed someone in her yard. It was Jake. What was he up to?

Late or not, she slowed down. As she looked on, he took two extra-large tumblers of water and dumped them over that ugly sign. A smile lifted her lips.