A Moment to Cherish

Whistle Stop is abuzz…the mayoral election is just weeks away.

Candidate Mason Noble has a vested interest in fast-tracking the town’s revitalization project. But the votes he’d counted on are drying up because his engagement to Bella Nez ended abruptly. The local grapevine is humming with rumors, but only he and Bella know the truth. And they aren’t talking!

When an emergency puts Bella in the proverbial tough spot, she needs money and fast. There’s only one person who can help–Mason. He agrees to a loan, but he has a condition. He needs Bella by his side again. A reconciliation would win over the townspeople–and it would give him a chance to win back the only woman he’s ever loved.

Bella hesitates to accept Mason’s terms. Until she’s blindsided by unexpected news that has her rethinking everything. Bella is expecting a baby, and there’s a heart-wrenching choice to be made… 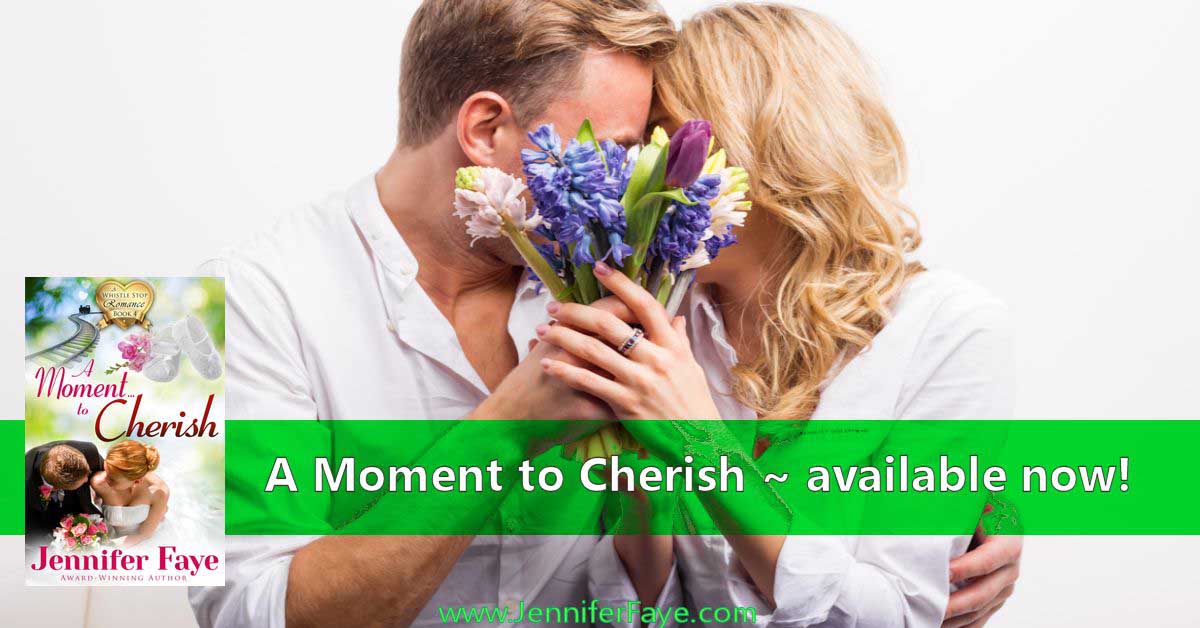 “I found that this story really touched my emotions. In fact, I had to have the tissues handy at one point since the tears kept flowing.” Romancing the Book

“Another fun stop in Whistle Stop, New Mexico!…The town is up in arms because the election for Mayor is only weeks away. Mason Noble was making inroads, but now that he and Bella Nez have ended their engagement, the townsfolk are looking at him less favorably.” Thoughts of a Blonde

“All in all, I really enjoyed this story. If you’re a fan of small town romances, I strongly recommend giving this series a try. And this book is a wonderful installment. I’m looking forward to more books in this series.” Romancing the Book

Please let her be okay.

Bella Nez laced her fingers together to keep from nervously fidgeting. She shifted on the hard plastic hospital chair, unable to take her gaze off her dearest friend. The hallways of Whistle Stop General Hospital were surprisingly quiet, but that didn’t put Bella at ease.

Thursday morning was definitely off to a bad start. Very bad. She hoped it wasn’t an omen for the rest of the day.

“I was late. So I was rushing to the dress shop. I wasn’t paying attention, and I tripped on the edge of the curb.”

“Are you sure nothing’s broken?”

“They took X-rays and ran a bunch of tests. They said they were concerned because of my age.” Miss Mabel sighed loudly. “I told them I never felt younger. I don’t think they believed me.”

Miss Mabel’s age was one of Whistle Stop’s mysteries. If anyone asked, she claimed she was thirty, give or take a year or two. Miss Mabel had been giving that same answer for so long that no one could actually recall her correct age—at least no one who would admit it. If Bella were to wager a guess, she’d say her friend was closing in on eighty. Her assumption was based on years of listening to the woman’s stories about growing up in Whistle Stop.

The truth of the matter was Miss Mabel had more energy than a lot of women half her age. “Did they say when they’d have the test results?”

“I tried to weasel some information out of the radiologist, but the young man wouldn’t tell me anything. He said I’d have to wait until Doc Willard looks at them.” Miss Mabel waved her hands in frustration. “It’s a bunch of hoopla over a few bruises. I’m already feeling better.”

Bella studied the woman’s pale complexion before shifting her gaze to the IV bag and the heart monitor. It certainly seemed like an awful lot for a few bruises. Was there more wrong with Miss Mabel than her injuries from the fall?

Bella sent Miss Mabel a reassuring smile, not wanting to worry her. “I’m glad you’re comfortable. Did they say anything else about your condition?”

“The nurse mentioned something about some of my vitals being elevated, but they’d have to wait for Doc Willard.”

Bella quietly nodded as concern continued to course through her veins. Nothing could happen to Miss Mabel. She was the only family Bella had, and she loved her dearly— just like a mother—more so, really.

And right now, she could use some motherly advice. But now wasn’t the time to unburden her troubles about her broken engagement. The priority was getting Miss Mabel back on her feet.

The woman turned her way and arched a brow. “You know, you’re the one who doesn’t look so good. We haven’t had much time to talk lately, but I’ve been concerned about you since you called off the wedding. Have you talked to Mason?”

Bella’s gaze moved to the black and white tiled floor. “There’s nothing left to talk about.” Liar. Liar.

“If things are truly over, then why haven’t you done anything about the wedding plans? The invitations were sent out. People will be buying wedding gifts and marking their calendar.”

“I…I haven’t had time to deal with all of that. Besides, I’m sure the grapevine and all of the gossiping took care of notifying everyone.”

Miss Mabel’s lips pursed together while her eyes reflected her disbelief. The problem was the woman knew Bella too well. And this was most definitely a discussion for another time.