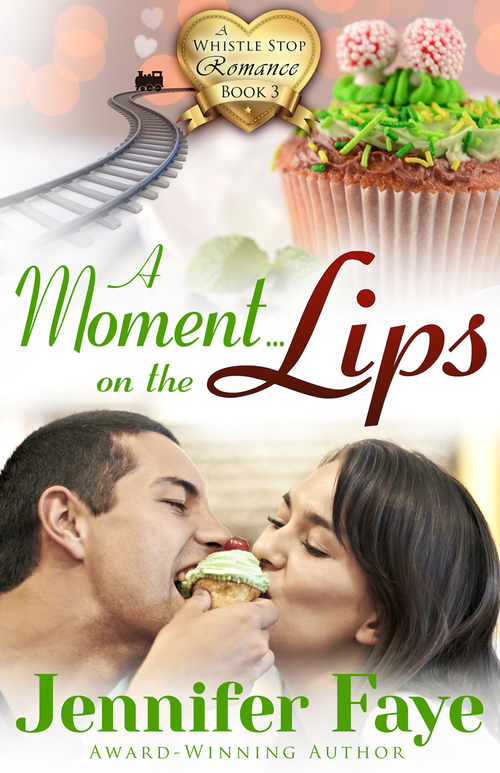 A Moment on the Lips

Piper Noble feels like she’s going places.  Her business, the Poppin’ Fresh Bakery, is a culinary success story. Next on her to-do list is expanding the bakery into the vacant shop next door…and starting a new diet, like her mom keeps nagging her to.  But when Joe Montoya steps into her life, her grand plans grind to a sudden halt.

Joe’s taken a big risk returning to Whistle Stop.  But with his disastrous marriage over, it’s time for a fresh start, including opening a coffee shop…and coming to terms with his troubled past.  Though his neighbor Piper looks like she’ll be a big distraction in getting Fill-It-Up Joe off the ground—with her honeyed smile,  curvy goodness, and her unflagging determination to grab his storefront.

However, when Piper and Joe are elected as co-chairs of a fundraising committee to help the town’s revitalization project, the hostilities must cease. Joe’s not sure about spending time with a woman who, one moment, reminds him of all the good things he’s been missing, and the next minute drives him up a wall with her stubbornness. Meanwhile, Piper’s looking for the way to this gorgeous but grouchy guy’s heart—maybe serving him one of her fresh-from-the-oven pastries could be just the right start…

4.5 Stars RECOMMENDED READ ” I would highly recommend A Moment on the Lips by Jennifer Faye, especially if you enjoy sweet reads with great characters, well-written dialogue and second chances.” Harlequin Junkie

“I always enjoy my trips back to Whistle Stop, New Mexico! The comfort of seeing so many characters you recognize is great, the atmosphere is fun and it’s just exciting to see who’s story you’re going to learn about this time!” Thoughts of a Blonde

“Author Jennifer Faye guides us along this stormy path, delighting and frustrating in equal turns as these two try to find their way to a HEA. It’s interesting, a bit steamy here and there, and filled with fun and disaster.” The Reading Cafe

Mm… Piper Noble’s tongue tingled with the anticipation of savoring a sweet treat.

“Tell me you aren’t going to eat that.” The all-too familiar voice carried with it disgust.

How could anyone find a cupcake offensive?

Piper frowned as her gaze moved from the freshly decorated cupcake in her hand to her mother, who’d just stepped inside Poppin’ Fresh Bakery. Lines of disapproval creased her mother’s perfectly made-up face.

“That’s not the way to have a good morning, with all of those calories. I thought I taught you better.”

When would her mother give up trying to control her life? After all, she’d started this bakery all on her own. She’d have thought that, instead of nitpicking, her mother would be proud of her accomplishments. She vowed to never ever meddle in someone’s life the way her mother did in hers.

Deciding not to argue and ruin the beautiful day, Piper took a different approach. “It’s a new recipe. Mocha chocolate cherry.” Piper waved the culinary decadence in front of her mother, hoping to tempt her into having a bite. “Give it a try it. I promise it’s not deadly.”

Instead of cracking even the tiniest smile, her mother pursed her lips, and her pencil-perfect brows knit together. “Honestly, Piper, you aren’t a young girl anymore. When will you ever show some restraint and act your age?”

A sharp retort teetered on the tip of Piper’s tongue. With difficulty, she choked it down. She refused to argue with her mother in her place of business—not that it’d do her any good.

At twenty-six, Piper thought she’d done well for herself. Now seemed like the time to tell her mother what she’d been holding back, an announcement that was bound to gain her mother’s approval.

She glanced toward the tables lining the front of the bakery where Mr. Wilks, an older gentleman, was enjoying his usual breakfast—a blueberry muffin and black coffee—while perusing the morning paper. He glanced up and smiled at her before returning his attention to the paper.

He was such a kind man. His best friend had been his dog until it passed away, leaving him alone with no family and no faithful companion. Her heart went out to him.

Not worried about Mr. Wilks repeating her exchange with her mother, Piper straightened her shoulders. It was time to tell her mother the news. A broad smile pulled at her lips. This was sure to impress her mother.

When she spoke, it was in hushed tones. “You know the business has been doing really well. So well, in fact, that I’m planning to expand into the vacant space next door.”

Her mother was quiet for a moment as though digesting the news. What was there to think about? It wasn’t like she was asking for a loan. For once, she just wanted her mother to be happy for her.

Piper’s mother adjusted the strap of her knock-off designer purse. “Interesting. And I suppose you’ll still be selling more of these sweets. I don’t know why you couldn’t be more like your brother. His investment firm is really taking off.”

Actually, it was an accounting firm, but Piper knew better than to argue the detail with her mother. It just wasn’t worth the aggravation. “And I’m happy for him, but that isn’t what I want to do with my life. I don’t like working with numbers.”

“You know his upcoming wedding will be the highlight of the town.”

“His wedding isn’t for months.” Her older brother, Mason, was forever her mother’s favorite. He could do no wrong. Piper sighed. It wasn’t his fault. He was a pretty great guy. She just wished her mother would quit comparing them, because Piper would always come up lacking as far as her mother was concerned.

“And your wedding would have been this month if you hadn’t called it off.”

“Mother, are you forgetting the pesky detail of me finding David in bed with someone else?”

Her mother’s face pinched up into an ugly frown as Piper held back an eye roll. Her mother had a severe case of selective hearing and memory.

“Well, instead of spending all of your time working behind that counter, you should be out finding yourself a husband. You know you aren’t getting any younger. Tick. Tock.”

“Enough!” Piper didn’t know what was up with her mother, but she was certainly on a roll. “This is not Pick on Piper Day.”

Piper’s gaze moved to the chocolate cupcake in her hand. She longed for the creamy frosting to melt over her tongue. It’d just be one more thing for her mother to hold over her head.

“You’re right. I’m sorry.” Her mother fidgeted with a ruby ring. “I’m just worried about you. I want you to be happy.”

“I am happy. You can stop worrying. Poppin’ Fresh Bakery is a success. Someday soon, you’ll be amazed at how big I can make this bakery.”

A spark of interest gleamed in her mother’s eyes. “You really think you can be happy here?” Her hand waved across the top of the display case. “It just seems to me there can’t be a big profit margin. You know, it isn’t too late for you to go to college—”

Her mother cast her a skeptical glance. “You’re sure?”

They both knew that wasn’t true. Her mother would persist—trying to get Piper to do things her way. Not that it’d sway Piper’s mind. She already considered herself successful—as a businesswoman. Although, there were other areas of her life where she wasn’t so successful. Such as the loathsome twenty-some—erm, closer to thirty—pounds she repeatedly failed to lose.

Her gaze moved to the cupcake. She wouldn’t…couldn’t eat it. Definitely not in front of her mother.

Wanting to rid herself of the temptation, she held it out to her mother. “Admit it. You’re just dying to try one of my creations.”

“And ruin my figure?” Her mother smoothed her hand over the black, fitted skirt that covered her trim waist and hips. “I don’t think so. I have to think about the future. Who’d want a frumpy, out-of-shape widow?”

“Hardly. And where has that philosophy gotten you? Absolutely nowhere. Remember, dear, a moment on the lips but a lifetime on the hips.” Her mother clucked her tongue. “If only you’d show some self-restraint, you’d lose the pounds. You could be so pretty—”

Behind them, a throat cleared.

Piper turned, her gaze landing first on a pair of cowboy boots. A pair of faded jeans and a large silver belt buckle nestled against flat abs. A breath fluttered in her chest. Her gaze rose up over a muscled chest that strained against a navy blue T-shirt. When her gaze reached the man’s tanned face, she was surprised to find that she didn’t recognize him. These days, Whistle Stop didn’t get many visitors—although there were plans in the works to change that sad fact.

So, where in the world had this stranger come from? And why hadn’t the bell above the front door chimed upon his arrival? And then a horrid thought struck her—had he overheard her mother’s lecture?

The intensity of his warm gaze made her heart thump and her palms grow moist. He might not be one of her regulars, but with his short brown hair, bronze features, and solid build, he was welcome to stop by any time. The more she looked at him, the more she felt as though she should know him. But she couldn’t place the face.

At last regaining her ability to speak, she said. “Welcome to Poppin’ Fresh. What can I get you?”

“I was hoping I could speak with the owner.” He stepped closer to the display case.

“That would be me. I’ll be right with you.” Piper turned back to her mother.

“By the way, I disagree.” The stranger spoke in deep, rich tones.
Confused, Piper faced the man again. “Excuse me?”

“I think you’re pretty just the way you are.” His voice was noticeably raised—loud enough for her mother to hear.

Heat swirled in her chest and rushed up her neck. She couldn’t remember the last time a man had paid her such a compliment. “Thank you. I…I’ll be right with you.”