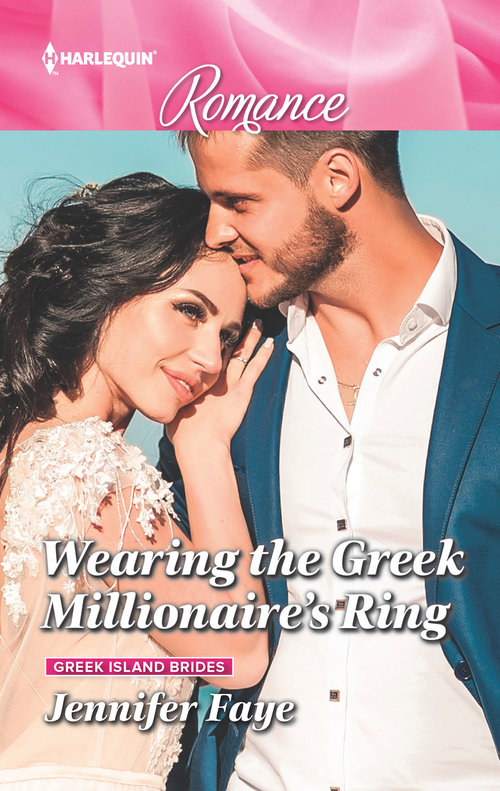 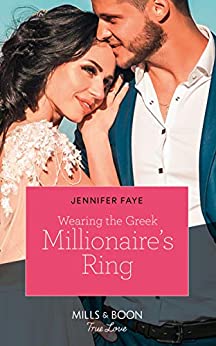 In this Greek Island Brides story, widow Stasia Marinakos is learning to enjoy life again aboard a Mediterranean cruise. Her chemistry with gorgeous Greek tycoon, Roberto Carrass, is a pleasant surprise – until she’s mistaken for his fiancée! Nevertheless, the guarded bachelor asks Stasia to continue the charade to stop his family matchmaking. As their attraction grows, their fake romance feels ever more real…but what will happen when the vacation ends? 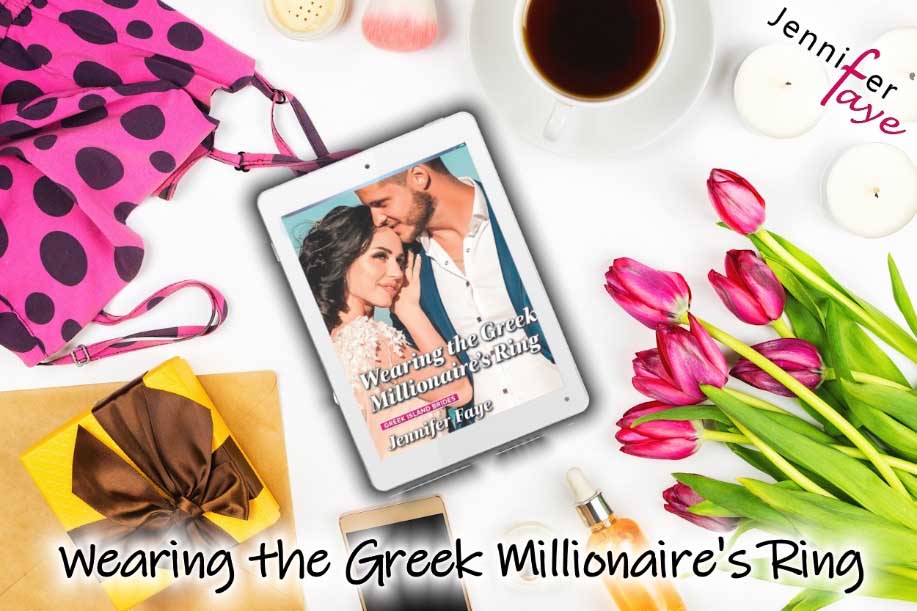 “I enjoyed this book a lot. I loved the setting of the book, where they are on a cruise. . . . I loved how instead of chapters there is Day one, Day two, etc. It was interesting to know which day of the cruise they were on.” Janicesbookreviews

Sometimes she felt as though there was nowhere she truly belonged.

And sometimes she enjoyed the freedom that allowed her.

Other times, like now, Stasia Marinakos wanted a clear path in life.

She’d had one not so long ago. Suddenly, that life had been brutally wrenched from her grasp. Though with each passing day, she was learning to live with the loss, allowing herself to smile again and forcing herself to remember that she was still living and breathing.

For the almost two years since her husband passed, Stasia had been focused on fulfilling his last wishes, tending to his estate and piecing together the broken pieces of her heart. But now that was complete. All of his wishes had been fulfilled, except one.

As she sat at one of the tables at the Hideaway Café, her gaze moved across the table to her brother. She knew if she opened up to him he wouldn’t understand. He would try to tell her what to do with her life and she didn’t want that. She needed to find her own answers.

Xander thought she should be cautious with her money and with her life. He wasn’t anxious for her to move on, which she found interesting considering he hadn’t liked her husband in the beginning. In fact, Xander had vehemently disapproved of him until just before Lukos found out that he was sick—

Stasia halted her thoughts. She didn’t want to go down that road. She needed to focus on the here and now. It was the only thing she could control.

“What am I supposed to do with this?”

Stasia held up a cruise ship ticket while sending her big brother a puzzled look. She didn’t have time for a vacation. Now that she was on her own, with no husband and no other family besides Xander, who now had a wife and baby, she needed to pull herself together and carve out a life for herself. That had to be her priority. As it was, she’d put it off for too long.

“Use the ticket and go on vacation.” Xander frowned at her as though he was concerned about her.

She shoved the ticket back across the table. “I don’t have time—”

“Sure you do.” Xander wasn’t a man used to hearing the word no. “Now that our real-estate deal fell apart—of which I am sorry—you have all the time in the world.” He sent her a reassuring smile. “And don’t worry. By the time you get back, I’ll have a new deal lined up that we can go in on together.”

How did she tell him that she no longer wanted to be involved in a deal without hurting his feelings? After all, she was the one who had come up with the idea of them working together in the first place. He’d initially been resistant to the idea, but she’d kept after him until he’d finally given in.

Of course, she’d had some help getting him to change his mind—Roberto Carrass, her brother’s best friend, who’d recently been elevated to the role of business partner. He’d sided with her, convincing Xander to let her be a part of the business.

Stasia pulled her thoughts back to the relevant subject. “I don’t want you going into a deal because you think it’ll suit me.” When he didn’t respond, she raised her voice just enough to gain his attention. “Xander, you aren’t listening to me.”

She blatantly rolled her eyes. Her brother barely heard a word she said and they both knew it. “Please—”

“Okay. Maybe I get distracted sometimes.”

She arched a brow. “Isn’t that how you ended up with your new family?”

“Ah, but see how well that worked out.” He sent her a smile that lit up his whole face. “I saw a good thing and I went for it.”

She couldn’t help but tease him. “Is that the story you’re going with?”

He shrugged and sent her a guilty smile. “It’s how I like to remember it.”

Stasia nodded. She didn’t mind him rewriting the rocky start of his romance with his now wife, Lea. In fact, Stasia found it endearing. Who knew her brother could be romantic? She never would have guessed it till now.

And as much as she wanted to confide in her big brother about her quandary, she couldn’t find the words. She’d been visiting Infinity Island for the past few weeks, reconnecting with her brother and learning more about her sister-in-law, Lea, while playing with the baby, Lily. Stasia had volunteered to babysit while Xander and Lea were working. And though Stasia’s days were now full, she still felt as though she was missing something.

As appealing as it was to remain here on this idyllic island with its clear blue water, gentle sea breeze and charming village, she couldn’t hijack her brother’s life. She’d been here long enough. It was time to head home to Athens.

“Let’s go for a walk.” Stasia took the last sip of her iced coffee.

Xander scooped up the cruise ticket and then got to his feet. “Lead the way.”

She didn’t have any particular destination in mind. She just needed to move. “I’ve never seen you happier.”

Stasia stopped walking and faced her brother. “Why should you feel guilty?”

“Because when you were so happy with Lukos, I was being foolish and getting in your way. And by the time I got my head on straight about your husband, he was…well…”

“He was dying.” She never thought she’d be able to say those words without breaking into a fit of tears. The memory of losing Lukos far too soon still hurt. She supposed it always would, but she was learning to live with the loss. “It’s okay, Xander. You can say he died. I won’t break into a million messy pieces.”

The look in his eyes said he wasn’t sure he believed her. “I miss him too. You do know we got to be good friends at the end.”

“I know.” The friendship between her husband and brother might not have happened as soon as she would have liked, but she was grateful they’d worked out their differences. She wasn’t sure how she’d have made it through that dark period without her brother by her side. “Lukos thought of you like a brother when he died.”

Xander reached out and gave her a great big hug. Lukos had made her promise that, no matter what happened in life, she wouldn’t let anything come between her and Xander. She’d made the promise. It hadn’t been hard. She loved her brother and she always would. She couldn’t imagine anything coming between them. He was stuck with his little sister for life.

Xander pulled back and placed the ticket in her hand. “This is your birthday gift. Please take it. I have it on good authority that you always wanted to take the cruise.”

She’d only told one person about her desire to cruise around Greece, Montenegro, Croatia and Italy. It would be her trial run to see if she enjoyed voyages before booking something a little farther from home, say the Caribbean, or possibly something a bit cooler, like Norway.

“Lukos told you?” She said it matter-of-factly.

Xander nodded. “He was disappointed he never got to take you on a cruise.”

Xander’s words took the fight out of her. She’d forgotten all about the things she’d wanted to do before Lukos got sick. They somehow seemed so trivial after all that had happened. Maybe Lukos somehow knew she would feel that way and this was his way of propelling her forward.

And now there were no more excuses—no more reasons to cling so tightly to the past. She needed to fulfill her husband’s final wish. She needed to look to the future and find her new path in life.

Her choice needed to be something meaningful. She needed a purpose, a compelling reason to get out of bed in the morning.

Her husband had done his best to watch out for her, leaving her enough money that, when combined with what she’d inherited from her family, it would keep her quite comfortable for the rest of her life. But she couldn’t wake up in the morning, enjoy her coffee and drift through the rest of the day. That wasn’t how she’d been raised.

She needed a reason to get excited. She needed a goal to strive for and even some setbacks to overcome to remind her of life’s many blessings. But what she didn’t need was being patted on her head and dismissed because people thought she wasn’t up to the challenge.

“Okay. I’ll go.” She forced a smile to her lips. All the talk of Lukos had deflated her mood. He should be going with her on this adventure, but she knew he would always be in her heart—it just wasn’t the same.

“And when you get back, I’ll have a business deal or two for you to look over. If one of them isn’t to your liking, I’ll keep looking until we find the right deal for you.”

She didn’t say anything about her waning interest in the real-estate market and wanting to strike out on her own. But she wanted a firm plan before she said anything to anyone.

“Thank you.” She hugged him again.

This cruise was going to be a turning point in her life. She’d take her laptop with her and make it a working trip. When she got back, she’d have her life all planned out.