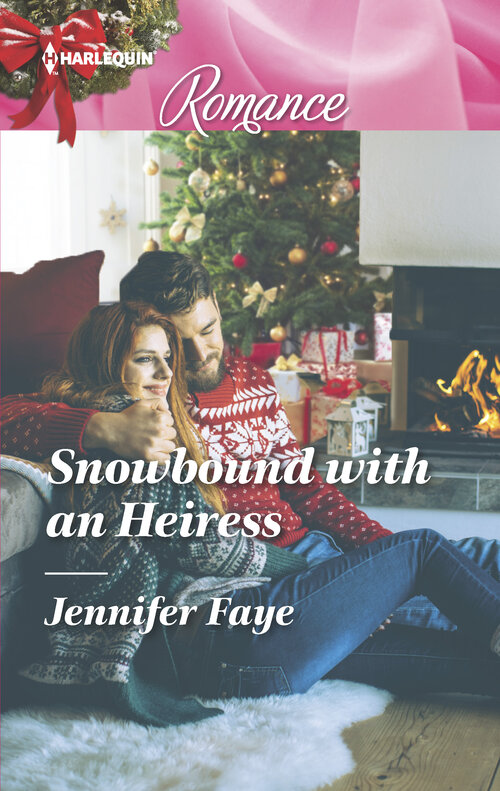 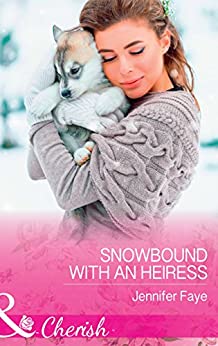 Snowbound with an Heiress

Heiress Serena Winston has gone off the grid for the holidays! She’s staying in a remote cabin in the Alps, looking to get away from it all…

Since losing his wife, Christmas isn’t the same for TV presenter Jackson Bennett. He goes where the work takes him, this time to Austria. But when an American beauty runs him off the road in a blizzard and a storm leaves them stranded, it seems like a disaster. Until their time alone turns into an unexpected Christmas to remember! 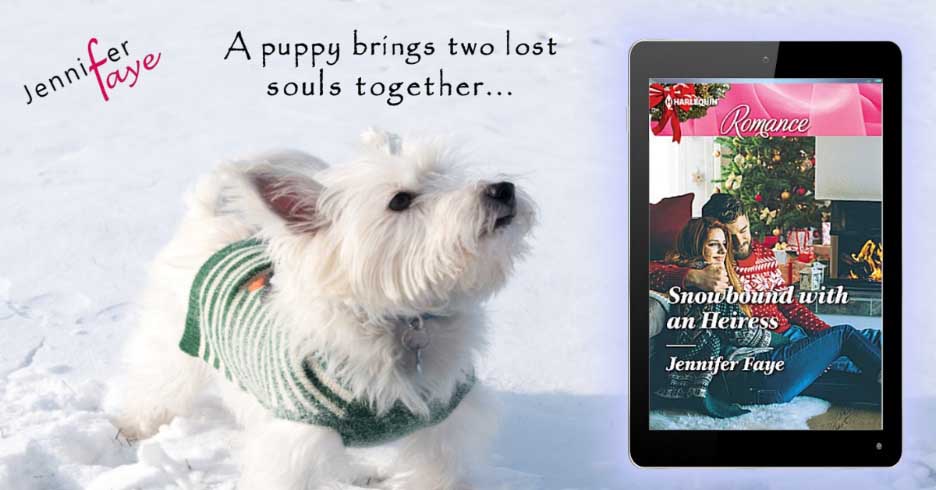 “Delightful weekend read! Us ladies can understand the frustration that Serena felt when her getaway was interrupted, especially when she realizes who the guy is. But as is usually the case, dogs know best and tend to bring people together for a reason. A romantic book to read in front of the fireplace at your next cabin getaway.” Book Lover in Florida

“SNOWBOUND WITH AN HEIRESS is a fun read! The chemistry is palpable, the characters likable, and the story interesting. Then there’s this little dog who almost steals the show and definitely will steal readers’ hearts… This is the perfect book to curl up to on a wintry night!” Wishful Endings

Serena Winston paused along the snowy path. Out here in the beauty of the Alps, it was so quiet. She lifted her face up to the warmth of the sun just seconds before it disappeared behind a dark cloud. Shadows quickly spread over the mountainous region of Austria.

She sighed. The sunshine had been so nice while it lasted, but the snow was starting to fall again. But she had to admit that the snowflakes had their own charm as they fluttered to the ground. It was so different from her home in sunny Hollywood.

There was already plenty of snow on the ground. Serena’s fondest wish had always been to learn to ski, but for one reason or another, she’d kept putting it off. First, it was due to the worry of injuring herself before filming a movie. Being an actress did have its drawbacks. And then, there just wasn’t time to jet off to Tahoe for a long weekend of skiing—especially now that she’d inherited her legendary father’s vast estate. Selling off some of his holdings was more complicated than she had anticipated.

Realizing the direction of her thoughts, she halted them. She drew in a deep, calming breath. This holiday excursion was meant for escaping her daily pressures and refocusing her Hollywood career. There was yet another reason for this spur-of-the-moment trip, but she didn’t want to think about it, either. There’d be time for problem-solving later.

When she glanced back down at her teddy bear dog, she found he’d wrapped his lead around a bush. The easiest way to fix the situation was to release Gizmo from his lead. It was no big deal. Gizmo was not one to wander off.

Gizmo gazed at her as though understanding what she’d said. He didn’t move a paw.

Serena set to work untangling the leash from the prickly shrubbery. It wasn’t an easy task. What had Gizmo been doing? Chasing something?

At last, she freed the leash. She’d have to be more careful about letting him out on the full length of the lead in the areas with rougher terrain.

She watched as her little dog took off in hot pursuit after a brown-haired creature. “Gizmo! Stop!”

Serena ran after the dog. She continued calling his name, but he paid her no heed. For a little guy with short legs, Gizmo could move swiftly when he was motivated enough. And right now, he was very motivated.

Serena wasn’t familiar with the terrain, as this was her first visit to the small village nestled in the Austrian Alps. This area had been on her bucket list to visit right after Fiji and right before Tasmania. With her rush to leave Hollywood, it seemed like the right time to scratch another adventure off her list.

The snow grew heavier. Between the snowflakes and trees, she spotted a road ahead. And though it appeared to be a quiet road, the thought of little Gizmo being anywhere near it had Serena pumping her legs harder and faster.

Serena’s foot struck a tree root. Down she went. Oomph!

The collision of her chest with the hard, frozen ground knocked the air from her lungs. She didn’t have a chance to regroup before she heard the sound of an approaching vehicle. With each heartbeat, the sound was growing closer.

She continued after the little furbaby who’d captured her heart a few months ago. At first, she hadn’t been so sure about owning a dog. Gizmo was full of puppy energy and in need of lots of love.

But now she couldn’t imagine her life without him. Gizmo made her smile when she was sad and he made her laugh when she angry. Not to mention, he got her up and moving when she thought she was too tired to take another step. He was there for her unlike anyone else in her life.

It wasn’t like Gizmo to take off and not listen to her. She supposed that between the long flight from the States and then the intermittent snow showers that they’d been cooped up inside for too long.

The blast of a horn shattered the silence.

It was followed by the sound of skidding tires.

Her heart leaped into her throat as she came to a stop.

A loud thud reverberated through the air. And then the crunch of metal sent Serena’s heart plummeting down to her new snow boots.

A whole host of frantic thoughts sprang to mind. They jumbled together. The immobilizing shock quickly passed and she put one foot in front of the other. All the while, she struggled to make sense of the tragedy that undoubtedly awaited her.

As if on autopilot, she cleared the overgrown path. She scanned the quiet road. Her gaze latched onto the back end of a dark sedan. Inwardly she cringed.

And to make things worse, there was no sign of Gizmo.

Or maybe that was a good thing. She was desperate to cling to any sense of hope. She held her breath and listened for a bark—a whimper—anything. There were no puppy sounds.

Steam poured out from the engine compartment of the crashed vehicle. The driver’s side was bent around a cluster of trees. Serena’s mouth gaped. Was that the reason Gizmo didn’t respond? A sob rose in her throat. Was he pinned in the wreckage?

Tears pricked the back of her eyes. Please, say it isn’t so.

Moisture dampened her cheeks. She swiped at the tears. For a normally reserved person who only cried on a director’s cue, Serena wasn’t used to a spontaneous rush of emotions. Realizing she couldn’t just stand there, she swallowed hard and then moved forward, wondering what she would find.

On legs that felt like gelatin, she moved across the road. Realizing the driver’s-side door was pinned by a tree trunk, she approached the passenger side and yanked open the door.

A snapping and popping sound emanated from the car. Serena didn’t even want to imagine what that might be. Still, she glanced around for any sign of fire.

Not finding any flames, Serena knelt down to get a better look. There in the driver’s seat was a man with dark brown hair. His head was leaned back against the seat. His eyes were shut. His dark lashes and brows gave his face a distinctive look. There was something familiar about him, but in her frantic state, she couldn’t make any connections. Right now, she had to get this man to safety in case his car went up in flames.

Even though she’d played a nurse once in a movie, she didn’t know much about first aid. The movie had been a stalker/thriller type. The medical aspects were minimal. She reached for the cell phone in her back pocket. She pulled it out, but there was no signal. This wasn’t good—not good at all.

“There…there was a dog…”

The deep male voice startled Serena. His voice wobbled as though he was still dazed. She glanced up to find a pair of dark brown eyes staring back at her. Her heart lodged in her throat. Was it wrong that she found his eyes intriguing? And dare she say it, they were quite attractive. They were eyes that you couldn’t help staring into and losing yourself.

The man’s gaze darted around as though trying to figure out what had happened. And then he started to move. A groan of pain immediately followed.

The man’s confused gaze met hers. “Why? Is there something the matter with me?”

She could feel the panic swelling between them. “I’m not sure.” She drew in a calming breath. Getting worked up wouldn’t help either of them. She drew on her lifetime of acting. “I don’t know the extent of your injuries. Until we know more, you shouldn’t move.” Which was all well and good until the car caught fire. But she could only deal with one catastrophe at a time. “I’m going to call for help.”

“You already tried that. It didn’t work.” His voice was less frantic and more matter-of-fact.

She swallowed hard. So he’d seen that. Okay. Don’t freak out or he’ll panic. Without a cell signal, their choices were diminishing. And the car was still popping and fizzing. She didn’t want to tell this injured man any of this. Nor did she want to admit that the dog that created this horrific event was hers. The backs of her eyes burned with unshed tears. And that her poor sweet puppy could very well be—

No. Don’t go there. Focus on getting this man help.

The man released his seat belt. The only way out for him was to crawl over the passenger seat. But he shouldn’t be moving around until a professional looked at him.

“Don’t move,” she said as he pushed aside the seat belt. “I’ll go and get help.”

He was sounding better, but it could just be shock. What if he got out of the car and collapsed in the middle of the road? She certainly couldn’t lift him, much less carry him. Even with him being seated, she could see that he was over six feet tall and solidly built. Why did he have to be so stubborn?

The man leaned toward the passenger seat.

“I’m serious. You shouldn’t be moving.” She swiped her hair out of her face. It was wet from melting snowflakes. It was coming down so hard that she couldn’t see much past the other side of the road. “You could make your injuries worse.”

As though transforming her concerns into reality, he groaned in pain. Serena’s heart lurched. She automatically leaned forward, placing a hand against the man’s biceps, helping to support him.

“What is it? What hurts?” Her gaze scanned his body looking for blood or any possible injury, but she didn’t spot any.

His breathing was labored. “It’s my leg.”

Not good. Not good at all.

And as if matters weren’t bad enough, a white cloud billowed out from under the hood. Her heart pounded. What was she supposed to do now?