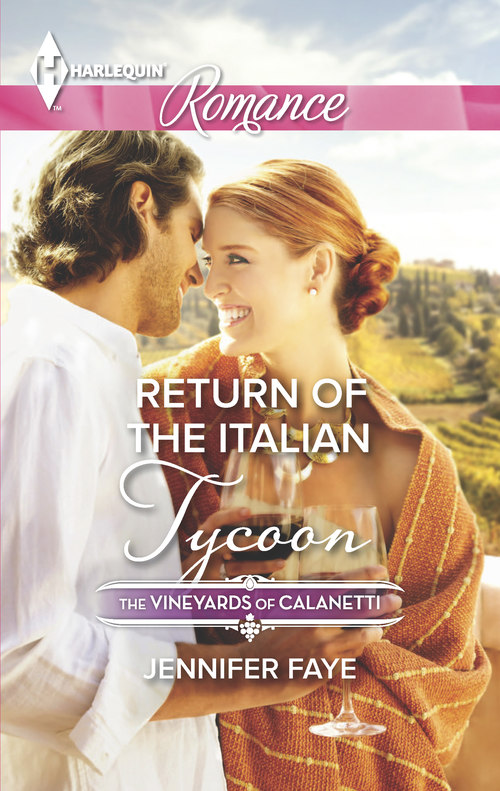 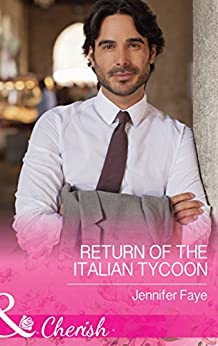 Return of the Italian Tycoon

Tough tycoon Angelo Amatucci must return to the Tuscan village of his childhood. With a lot of work to do, he brings his dedicated assistant Kayla Hill with him.

As beautiful Kayla falls for the village’s charms, she also discovers a new, very attractive side to Angelo—working with him to secure a wedding contract is blissful torture! Especially as Kayla begins to wonder what it would be like to be Mrs. Amatucci…

Saying “I do” under the Tuscan sun… 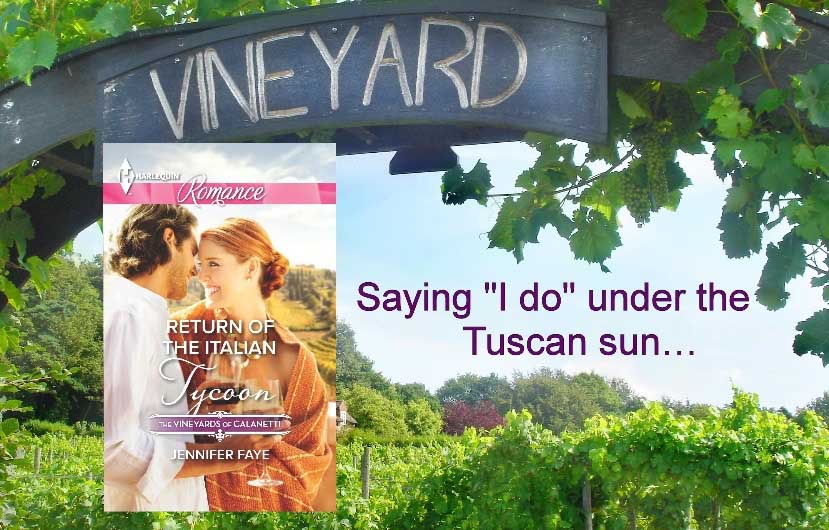 Kayla Hill’s fingers struck the wrong keys on her computer. Surely she hadn’t heard her boss correctly—her very serious, very handsome boss. “Excuse me. What did you say?”

Angelo Amatucci’s tanned face creased with lines as though he were deep in thought. “Are you wearing perfume?”

“Good. That will be helpful. May I have a smell?”

Helpful? With what? She gave up on answering an email and turned her full attention to her boss, who moved to stand next to her. What in the world had prompted him to ask such a question? Was her perfume bothering him? She sure hoped not. She wore it all the time. If he didn’t like it or was allergic to it, she thought he’d have mentioned it before now.

Kayla craned her neck, allowing her gaze to travel up over his fit body, all six-foot-plus of muscle, until she met his inquisitive eyes. “I’m sorry but I…I don’t understand.”

“I just finished speaking with Victoria Van Holsen, owner of Moonshadows Cosmetics. She has decided that her latest fragrance campaign, even though she painstakingly approved it each step of the way, just won’t do.”

“She doesn’t want it?” Kayla failed to keep the astonishment out of her voice.

A muscle in his jaw twitched. “She insists we present her with a totally new proposal.”

“But this is a Christmas campaign. Everything should be finalized, considering it’s already March.” Then, realizing that she was speaking to a man with far more experience, she pressed her lips together, silencing her rambling thoughts.

“Now that information about her competitor’s upcoming holiday campaign has been leaked, she wants something more noteworthy—something that will go viral.”

“I thought the campaign was unique. I really like it.” Kayla truly meant it. She wasn’t trying to butter up her boss—that was just an unexpected bonus.

“The fact of the matter is, Victoria Van Holsen is a household name and one of our most important clients. Our duty is to keep her happy.”

It was the company’s motto—the client’s needs come first. No matter what. And if Kayla was ever going to rise up the chain from her temporary detour as the personal assistant to the CEO of Amatucci & Associates Advertising to her dream job as an ad executive on Madison Avenue, she could never forget that the clients were always right. It didn’t matter how unreasonable or outrageous their requests might be at times, keeping them happy was of the utmost importance.

His face was devoid of emotion, giving no hint of his thoughts.

She did as he asked. Her heart fluttered as he circled her. When he stopped behind her and leaned in close, an army of goose bumps rose on her skin. Her eyes drifted closed as a gentle sigh slipped across her lips. Angelo Amatucci truly did want an up close and personal whiff of her perfume.

He didn’t so much as touch a single hair on her, but she could sense him near her neck. Her pulse raced. If this most unusual request had come from anyone else, she’d swear they were hitting on her. But as Mr. Amatucci stepped to the front of her, his indifferent expression hadn’t changed. Her frantic heart rate dipped back to normal.

There had never been any attempt on his part to flirt with her. Though his actions at times could be quite unpredictable, they were always ingenuous. She deduced that his sudden curiosity about her perfume had something to do with the Van Holsen account. But what could he be thinking? Because there was no way she was wearing a Moonshadows fragrance. One ounce of the stuff would set her back an entire paycheck.

“It seems to have faded away.” A frown tugged at his lips.

“Perhaps this will be better.” She pulled up the sleeve of her blue suit jacket and the pink blouse beneath it before holding out her wrist to him. “Try this.”

His hand was warm and his fingers gentle as he lifted her hand to his face. Her heart resumed its frantic tap dancing in her chest. Tip-tap. Tiptap. She wished it wouldn’t do that. He was, after all, her boss—the man who held her career aspirations in the palm of his very powerful hand. A man who was much too serious for her.

Still, she couldn’t dismiss that his short dark wavy hair with a few silver strands at the temples framed a very handsome, chiseled face. His dark brown eyes closed as he inhaled the fragrance, and she noticed his dark lashes as they swept down, hiding his mesmerizing eyes. It was a wonder some woman hadn’t snatched him up— not that Kayla had any thoughts in that direction.

She had narrowly escaped the bondage of marriage to a really nice guy, who even came with her Mom’s and Dad’s stamp of approval. Though the breakup had been hard, it had been the right decision for both of them. Steven had wanted a traditional wife who was content to cook, clean and raise a large family. Not that there was anything wrong with that vision. It just wasn’t what she envisioned for her future. She wanted to get out of Nowhereville, USA, and find her future in New York City.

When Mr. Amatucci released her arm, she could still feel warmth where his fingers had once been. Her pulse continued to race. She didn’t know why she was having this reaction. She wasn’t about to jeopardize her rising career for some ridiculous crush on her boss, especially when it was perfectly obvious that he didn’t feel a thing for her.

Mr. Amatucci’s gaze met hers. “Is that the only perfume you wear?”

“Could I convince you to wear another fragrance?”

He was using her as a test market? Interesting. She could tell him what he wanted to hear, but how would that help him develop a new marketing strategy? She decided to take her chances and give him honest answers.

“Why would I change when I’ve been using this same perfume for years?”

He rubbed his neck as she’d seen him do numerous times in the past when he was contemplating new ideas for big accounts. And the Van Holsen account was a very big account. The fact that the client had the money to toss aside a fully formulated ad campaign and start over from scratch was proof of their deep pockets.

Mr. Amatucci’s gaze was still on her, but she couldn’t tell if he was lost in thought. “How long have you worn that fragrance?”

“Since I was a teenager.” She remembered picking out the flower-shaped bottle from a department store counter. It was right before her first ever school dance. She’d worn it for every special occasion since, including her first date with Steven. And then there was her high school graduation followed by her college commencement. She’d worn it for all the big moments in her life. Even the day she’d packed her bags and moved to New York City in search of her dreams.

“Talk to me.” Mr. Amatucci’s voice cut through her memories. “What were you thinking about just now?”

Kayla glanced hesitantly at Mr. Amatucci. In all of the weeks she’d worked as his PA, they’d never ventured into a conversation that was the slightest bit personal. Their talks had always centered around business. Now, he’d probably think she was silly or sentimental or both.

“I was thinking about all the times in my life when I wore this perfume.”

“And I wore it for every major event. My first date. My first kiss. My—”

A sharp look from him silenced her. “So your attachment to the fragrance goes beyond the scent itself. It is a sentimental attachment, right?”

She shrugged. “I guess so.”

She’d never thought of it that way. In fact, she’d never given her perfume this much thought. If the bottle got low, she put it on her shopping list, but that’s as far as her thoughts ever went.

“So if our client doesn’t want to go with a sparkly, feel-fabulous-when-you-wear-this campaign, we can try a more glamorous sentimental approach. Thanks to you, we now have a new strategy.”

She loved watching creativity in action. And she loved being a part of the creative process. “Glad I could help.”

He started to walk away, then he paused and turned back. “You were just promoted to a copywriter position before you took this temporary assignment as my PA, right?”

She nodded. What better way to get noticed than to work directly for one of the biggest names in the advertising industry.

“Good. You aren’t done with this project. I want you to dig into those memories and write out some ideas—”

“But don’t you have a creative team for this account?” She wanted to kick herself for blurting out her thoughts.

Mr. Amatucci sent her a narrowed look. His cool, professional tone remained unchanged. “Are you saying you aren’t interested in working on the project?”

Before she could find the words to express her enthusiasm, his phone rang and he turned away. She struggled to contain her excitement. This was her big opening and she fully intended to make the most of it.

This was going to work out perfectly.

A smile tugged at Kayla lips. She’d finally made it. Though people thought she’d made a big mistake by taking a step backward to assume a temporary position as Mr. Amatucci’s PA, it was actually working out just as she’d envisioned.

She’d gone after what she wanted and she’d gotten it. Well, not exactly, but she was well on her way to making her dreams a reality. With a little more patience and a lot of hard work, she’d become an account executive on New York’s famous Madison Avenue in the exclusive advertising agency of Amatucci & Associates.