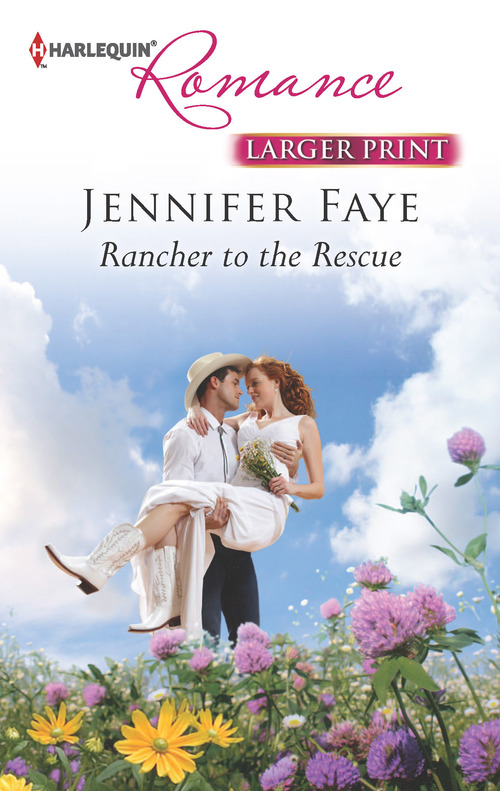 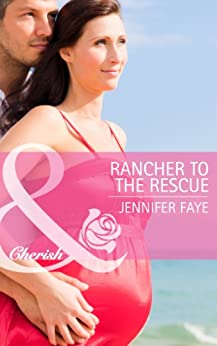 Rancher To The Rescue

Damsel in a wedding dress!

Jilted at the altar, celebrity chef Meghan Finnegan flees the scene – and the baying press – only to run straight into the muscled torso of Cash Sullivan.

The former rodeo champion knows what it’s like to have your life crumble in the spotlight, so he offers Meghan a place to lie low at his ranch.

Fresh air, no paparazzi and the brooding rancher’s lazy smile are making Meghan not want to leave her sanctuary. But she and her unborn baby can’t stay here forever…can they? 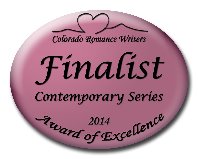 WHY DO PEOPLE insist on pledging themselves to each other? Love at best was fleeting—if it existed at all.

Cash Sullivan crossed his arms as he lounged back against the front fender of his silver pickup. He pulled his tan Stetson low, blocking out the brilliant New Mexico sun. From the no parking zone he glanced at the adobe-style church, where all of the guests were gathered, but he refused to budge.

His grandmother had insisted he bring her, but there was no way he’d sit by and listen to a bunch of empty promises. Besides, he’d met the groom a few times over the years and found the guy to be nothing more than a bunch of hot air. Cash would rather spend his time wrestling the most contrary steer than have to make small talk with that blowhard.

He loosened his bolo tie and unbuttoned the collar of his white button-up. Gram had insisted he dress up to escort her in and out of the church—even if he wasn’t planning to stay.

What he wouldn’t give to be back at the ranch in his old, comfy jeans, instead of these new black ones that were as stiff as a fence rail. Heck, even mucking out stalls sounded like a luxury compared to standing here with nothing to do.

A woman in a white flowing dress caught his attention. She was rushing along the side of the church. Abruptly she stopped and bent over some shrubs. What in the world was the bride doing? Looking for something?

This was certainly the most entertainment he’d had in the past half-hour. He shook his head and smiled at the strange behavior. When she started running down the walk toward his vehicle, he tipped his hat upward to get a better view.

A mass of unruly red curls was piled atop her head while yards of white material fluttered behind her like the tail of a kite. Her face was heart-shaped, with lush lips. Not bad. Not bad at all.

Her breasts threatened to spill out of the dress, which hugged her waist and flared out over her full hips. She was no skinny-minny, but the curves looked good on her. Real good.

He let out a low whistle. She sure was a looker. How in the world had boring Harold bagged her?

He couldn’t tear his gaze from her as she stopped right next to his pickup and tried to open the tan SUV in the neighboring parking spot. Unable to gain access, she smacked her hand on the window. Obviously this lady had a case of cold feet—as in ice-cold—and hadn’t planned an escape route. At least she’d come to her senses before making the worst decision of her life.

The bride spun around. Her fearful gaze met his. Her pale face made her intense green eyes stand out bright with fear. Alarm tightened his chest. Was there more going on here than a change of mind?

She glanced over the hood of his truck. He followed her line of vision, spotting a group of photographers rounding the corner of the church. In the next second she’d opened his passenger door and vaulted inside.

What in the world was she doing? Planning to steal his truck? He swung open the driver’s side door and climbed in.

“What are you doing in here?”

The fluffy material of her dress hit him in the face as she turned in the seat and slammed the door shut.

He smashed down the material from her veil, not caring if he wrinkled it. He’d never laid eyes on this woman before today, and he wasn’t about to drive her anywhere until he got some answers. “Why?”

“I don’t have time to explain. Unless you want to be front and center in tomorrow’s paper, you’ll drive.”

His gaze swung around to the photographers. They hadn’t noticed her yet, but that didn’t ease his discomfort. “You didn’t kill anyone, did you?”

“Of course not.” She sighed. “Do you honestly think I’d be in this getup if I was going to murder someone?”

“I’m not into any Bonnie and Clyde scenario.”

“That’s good to know. Now that we have that straightened out, can you put the pedal to the metal and get us out of here before they find me?”

He grabbed the bride’s arm and yanked her down out of sight, just before the group of reporters turned their curious gazes to his pickup. Luckily his truck sat high up off the ground, so no one could see much unless they were standing right next to it.

“What are you doing?” she protested, struggling.

“Those reporters don’t know you’re in here, and I don’t want to be named in your tabloid drama. Stay down and don’t get up until I tell you to.”

His jaw tensed as he stuffed the white fluff beneath the dash. He was caught up in this mess whether he wanted to be or not.

Her struggles ceased. He fired up the truck and threw it in reverse. Mustering some restraint, he eased down on the accelerator. Damn. He didn’t want to be the driver for this bride’s getaway, but what choice did he have?