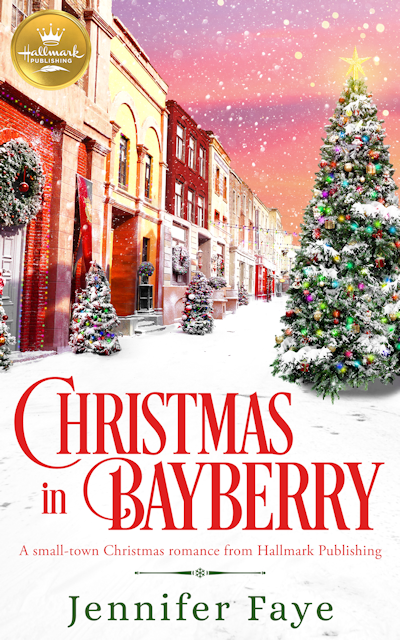 He’s trying to save the family candle company.

He’s trying not to fall for Bayberry, and her, again.

Kate Taylor knows what she wants in life: to one day run her family’s candle business, which is at the heart of the close-knit community of Bayberry, Vermont. But the company isn’t doing well.

Wesley Adams is on the fast track to be an assistant vice president at his financial firm in Manhattan. Before the promotion is announced, he’s sent to this small town from his past to do a analysis of the candle company.

He doesn’t expect to bump into his childhood crush, Kate, and when he does, sparks fly. As he spends time in Bayberry, he falls for the town’s Christmas traditions—and for her. But he has a responsibility to submit an honest report. Will it extinguish Kate’s dreams…along with any chance they have for a future together?

“I can already picture the film version of it.” Parade Magazine

“If you love Hallmark movies, this is the holiday novel for you.” Better Homes & Gardens

“This is truly a Christmas reading delight! . . . This tale is such a relaxing drama, enclosed within a small town full of “Christmas Spirit”. although quite predictable, it is endearing and the characters and scenes”draws one in”.” Rockin’ Book Reviews

“This is truly the sweetest Christmas book I’ve read in quite sometime . . . Jennifer’s writing and detailed descriptions have you feeling as if you are in this small town Vermont. . . . I highly recommend this beauty to get you in the holiday spirit!” Books with Bethany

Standing in front of the large glass windows of the Manhattan skyscraper, Wesley Adams had an excellent view of the late-November sky, making it seem like the city was inside a great big snow globe that someone had given a shake. Or maybe that’s just how life felt right now—shaken and turned on its head.

He started walking, refusing to let the entire day go sideways on him. If he kept moving, he could meet all of his deadlines. He glanced at the black leather wristwatch with the gold face that his mother had given him when he’d graduated from college. It had been all she could afford—probably more than she could afford—and he loved both her and the watch dearly.

For a senior business advisor, there was so much work when the end of the year rolled around. Worst of all, everything needed to be done at once. For Wes, when it came to holidays or a deadline, the deadline always won out. There were always risk analyses and restructuring deals that needed to be completed ASAP. Business didn’t take holidays. It was the mantra of Watson & Summers.

Wes rushed down the hallway toward his office. Even though the holiday season was upon them, the office was devoid of decorations. Not one tiny Christmas tree or so much as an ornament was to be found anywhere on the floor. There wasn’t even holiday music playing over the speaker system. Mr. Summers, as he insisted on being called, thought bringing Christmas into the office would encourage employees to act as if they were on holiday instead of proceeding with business as usual. Wes didn’t agree, but it wasn’t his place to argue the point.

As usual, Wes was prepared to work through the entire Thanksgiving weekend. He was certain it would be the same for Christmas. Too much work and not enough time. He told himself that being in the office was the way he liked it—a chance to get ahead.

After all, he was in line for a promotion to assistant vice president. If he could land the prestigious position, it would mean more money—money he could use to rent a place for his mother here in the city, near him. As his father had passed on a few years back, Wes worried about her living all alone in Florida. It was so far away. And she didn’t like to fly.

Of course, she insisted she had all of her friends, should she ever need anything, but sometimes he wondered if she was truly as happy as she let on. Or was she saying what she thought he wanted to hear? He wouldn’t put it past her. All she’d ever wanted was for him to be happy.

Right now, Wes had fifteen minutes to verify the projected five-year growth report and print out an income statement for his next meeting with an important client. He’d meant to get it done this morning, but one impromptu consultation had led to another. No wonder the work on his desk piled up.

“Hey, Wes,” the president of the firm called out to him.

Wes stopped in front of the office door. He peered in at the older man, who had just a few gray hairs left on his head and permanent frown lines marring his face. “Hello, Mr. Summers. What do you need?”

His boss’s bushy brows drew together. “Do you have the report on the Wallace account?”

“No rush. As long as you have it to me by eleven.”

Wes nodded. He checked his watch again. Fourteen minutes till eleven. So much for not worrying about getting the report to Mr. Summers right away. His mother had always said, If you want something done, give it to a busy person. Had that been some sort of prediction about his life?

After the promotion, things would slow down. He’d have staff under him to help balance out his workload. It would all get better. He just had to hang in there until the first of the year. That should be easy. Not a problem at all.

He couldn’t help but smile at the world’s biggest lie.

“Good morning, Wes.” The older woman’s ivory face lit up as color bloomed in her cheeks. She peered at him over her black-rimmed reading glasses. “Thank you for the Boston cream donut. I was going to save half for lunch, but one bite led to another. It was so good.”

At least once a week, he made a point of stopping at the bakery on his way into the office. It was a small way to thank the people who helped him throughout the week.

“Glad you enjoyed it. How’s your mother doing?”

“Better, now that her cold has passed,” Jan said with a smile. “She’s promising cookies and pie for Christmas. And she’s making a nut roll just for you.”

“You’re both too good to me.” He’d gotten to know Jan’s mother a few years ago, when he’d volunteered to help move Jan’s mother into a senior’s high rise.

Jan whispered, “I’ve got my fingers crossed for you. It won’t be long now.”

He knew she was talking about the promotion. He grinned. “Thanks. I’ve got to run.”

“Let me know if you need anything.”

He greeted other co-workers but kept moving, because time was money and there was never enough of either. Still, he liked to acknowledge the friendly people he worked with every day.

“Morning Joe,” he said to the mailroom guy, who was pushing a full mail cart down the hallway.

“Morning.” A few years younger than Wes, Joe attended night school. He liked to say that he was working his way up through the company—starting on the ground floor. “I left those files you put a rush on in your office.”

“Thank you. You’re a lifesaver.”

Joe smiled and continued pushing the loaded mail cart in the opposite direction.